As you can probably guess, the two different legs of the tour were a study in contrasts. Edmonton was bitterly cold with wind and snow. During Justin’s brief visit the temperature stayed well below freezing. But if Edmonton was unseasonably cold (even for Edmonton), Arizona was unseasonably warm with daytime highs soaring well past 33° C (90° F). And while all our Alberta events were in Christian venues (a seminary and two churches), the Arizona events were hosted by humanist/skeptic/freethought/atheist groups. 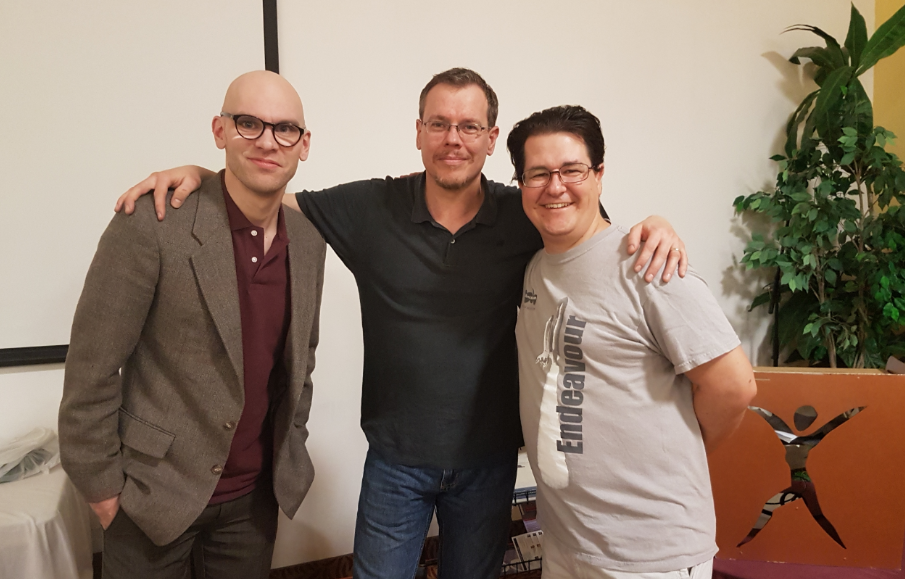 Here I am with a noticeably standoffish Justin Schieber (left) and Chris Wojno, the President of the Humanist Society of Greater Phoenix (right). (In case you’re wondering, that puts me right in the middle.)

We arrived in Phoenix on Saturday morning and were picked up by Chris Wojno, the President of our host organization, the Humanist Society of Greater Phoenix.

In the evening we arrived at the HSGP’s building for our 7 pm event. They own a very nice facility that looks like a small church or community center. Eventually about thirty people showed up and we launched into our brief ten minute presentations before we segued to open Q&A with the audience.

The dialogue with the audience went for two hours, and despite the length it seemed to go quickly with an endless array of spirited questions and comments. 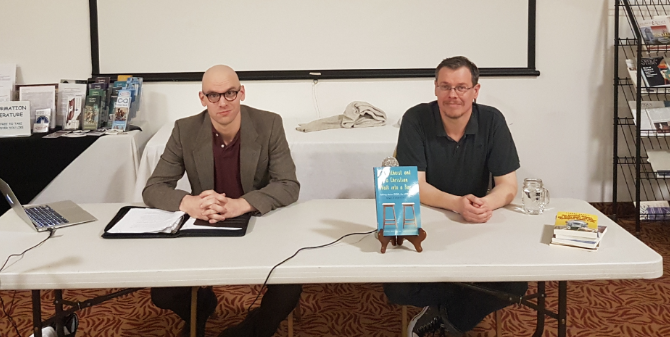 Although we covered many topics, on this evening a significant number of the questions covered the topic of the Bible and biblical violence in particular. Perhaps the most notable exchange occurred at the very end with a gentleman who based his comments on the book Alpha God which seeks to interpret religious violence by way of evolutionary psychology. He spent a couple minutes graphically describing violence among chimpanzee populations before seguing into a chronicle of the list of violence incidents described in the Bible.

Needless to say, this was not the moment to get into a debate point by point about the methods and analysis of Alpha God or the specific biblical passages that had just been referenced. Instead, I smiled and thanked him for sharing his views. And here’s the thing: after the event he came up to chat a bit more, we shook hands, and he bought a copy of our book while generously telling me to keep the change.

Throughout that exchange I recognized that this gentleman had a right to be angry: the Bible does contain several prima facie problematic violent texts. And when one is given a grid like Alpha God to interpret them, it is not surprising that a person might exhibit some passion. As for my part, I limited myself to the wisdom of Proverbs 15:1: “A gentle answer turns away wrath, but a harsh word stirs up anger.”

After the event at the HSGP we were picked up by Oliver Spires of Freethought Arizona. Oliver drove two hours through the desert night until we arrived at the house he shares with his partner, Lisa Laurence. Lisa was our initial contact for the Arizona events and she worked tirelessly to bring it altogether. It was a real pleasure to receive Oliver and Lisa’s hospitality as they put us up for a couple days at their house along with great food and great conversation. 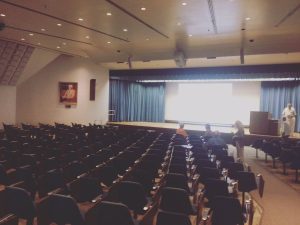 Don’t worry, more people showed up at the theater before we began: about 90 in all.

Sunday morning we went to our 10 am event at Freethought Arizona. As with the night before, we began with approximately a ten minute opener before we went to audience Q&A. Some of the questions were barbed: case in point, the first questioner asked me how old I was when I was first indoctrinated! But most questioners were very congenial, if pointed. All in all, it was a very invigorating exchange.

After the event we adjourned to the hospital cafeteria (the rented theater is in a hospital) for lunch and some great conversation. This was another really great group. 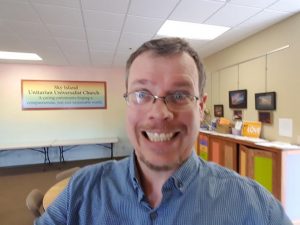 Randal-selfie in the Sky Island Unitarian Universalist Church in Sierra Vista. (By the way, how much caffeine was in that cup of coffee?)

After lunch we were picked up by Carolyn of the Sierra Vista Freethinkers. Next, we took another hour 1/2 drive south to the town of Sierra Vista, just a handful of miles from the border with Mexico. (By the way, during my visit to Arizona I logged many places I want to visit on a future trip, and one of them is the nearby town of Bisbee, a bohemian community of artists and non-conformists which reminds me of Nelson, BC.)

The Sierra Vista event was held at the local Unitarian Universalist Church. This final event was the smallest (about 20 people) but in a small town in politically conservative, rural Arizona, that ain’t bad at all.

It’s interesting to note how different themes/topics emerged as dominant in each event. In this final exchange the focus was primarily on issues of religion, politics, and science. The variety of topics certainly gave each event a distinct character.

Once again, it was a rich exchange. Afterwards we retreated to a leisurely dinner at the local Olive Garden with a couple families from the group and then we headed back to Tucson and prepared to fly home the following day.

First off, I’m thankful to all our hosts — Chris, Oliver, Lisa, and Carolyn — and all the fine people we met along the way. This Arizona trip just reinforced my perception of how we need to keep talking to one another, learning each other’s stories, and seeking to cultivate Henri Nouwen’s wisdom that listening is the highest form of hospitality.

I have a positive stereotype that self-described freethinkers, humanists, and atheists are by and large more concerned with the environment than your average Christian (and especially your average conservative Christian). That positive stereotype was borne out by the Chevy Volt and Toyota Prius that shuttled us between events. I also have a (for me positive) stereotype that freethinkers, atheists, and humanists share my broad progressive political agenda and aversion to Trump. That too was largely borne out.

I also have a negative stereotype that some freethinkers, humanists, and atheists tend to be dismissive of alternative (e.g. religious) perspectives as irrational and indoctrinational. Alas, at some points that too was borne out at times. But hopefully our largely irenic events put a dent into the negative presuppositions held by some.

All in all, it was a very enriching exchange and I was grateful to receive the warm embrace of so many. The sun, desert heat and palm trees weren’t bad either!

An Atheist and a Christian Walk into a Bar, Arizona, atheism, book tour, freethought, Justin Schieber