We live in an age where extreme and hateful voices like that of Milo Yiannopoulos get way more attention than they deserve. I was disgusted when Bill Maher hosted Milo on Real Time last week (and I applaud Jeremy Scahill for withdrawing from the show in protest). By the time the video surfaced of Milo advocating for pedophilia, I had no energy left for more righteous indignation. I was spent. Being outraged takes a lot of emotional energy and my reserves were exhausted.

Then I started seeing the tweets from Christians talking about how we need to pray for Milo.

And somehow I found more energy.

Let me start by emphasizing that I understand the Christian Gospel. All have sinned and fallen short of God’s glory. All are in need of mercy and forgiveness. And most of us tend to draw the line between those who are forgivable and those who are not in a way that suits our personal interests. Our sins can be forgiven. But as for the sins of the other guy, well I’m not so sure.

Rather, my concern is with a certain triteness, a flippancy, with which some Christians seem to speak of prayer, repentance, forgiveness, and restoration. 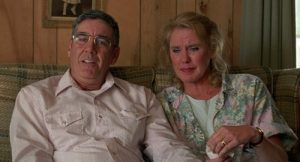 The Percys in “Dead Man Walking” as they learn that Sister Prejean agreed to be the spiritual adviser for Matthew Poncelet.

Let me start here: Dead Man Walking is one of my favorite films. Based on the memoir of Sister Prejean, it tells the story of how the Sister befriended a convicted rapist and murderer on death row. The film ends with a powerful scene of repentance from Matthew Poncelet and I hope for that same repentance from every wayward sinner.

But before we get there, we need to camp out for a bit on the offense. We need to allow those who have been victimized to be heard. The Percys, the parents of the young woman that Poncelet raped and murdered, are outraged by Sister Prejean’s relationship with the monster. Then Sister Prejean comes to see the Percys to explain to them that she has agreed to become Poncelet’s spiritual adviser. Initially they misunderstand the purpose of her visit:

Mr. Percy: So, what made you change your mind?

Mrs. Percy: What made you come around to our side?

Sister Prejean:  I wanted to come and see if l could help y’all and pray with you.

Sister Prejean: But he asked me to be his spiritual adviser, to be with him when he dies.

Mrs. Percy: And what did you say?

Sister Prejean: That l would.

Mrs. Percy: We thought you’d changed your mind. We thought that’s why you were here.

Sister Prejean: Mr. Percy, l’ve never done this before. l’m trying….  l’m trying to follow the example of Jesus…who said that every person is worth … more than their worst act.

Mr. Percy: This is not a person. This is an animal. No, l take that back. Animals don’t rape and murder their own kind!  Matthew Poncelet is God’s mistake.  And you want to hold the poor murderer’s hand? You want to comfort him when he dies? There wasn’t anybody in the woods to comfort Hope … when those two animals pushed her face into the grass!

Sister Prejean’s theology is correct. But we still need to hear the voice of the victimized. And for that I commend her: she wasn’t going to be Poncelet’s spiritual adviser without first hearing from his victims.

This brings me to the “Pray for Milo” tweets. I have no problem with folks praying for Milo. But if you’re going to do it, don’t be flippant about it. Don’t be trite. Start by reading some accounts of child rape. Read some cases where priests sodomized thirteen year old boys. Read about the kind of actions that Milo was praising. And then pray for him. Earn the right to pray for him by first heeding the voices of the victims.