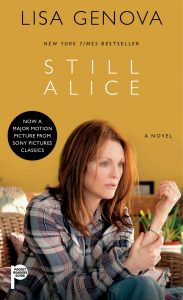 Lisa Genova’s 2007 novel Still Alice tells the story of Harvard professor and scholar Alice Howland and her journey living with early onset Alzheimer’s Disease. Howland is a few months into her fiftieth birthday when she receives the terrible diagnosis. From there the book follows her on her slow and painful decline into dementia.

At first blush, God is conspicuously absent from Still Alice. At one point Howland wanders into a church as she is wrestling with the emotional fallout from her diagnosis. But she has long been alienated from the church and any religious faith, and nothing much changes in that regard.

However, one would be mistaken to conclude that the book lacks spiritual depths to explore. When tragedy strikes, the inevitable question arises: why? God may not be a visible part of Alice’s life, but she asks the question just the same. Why Alice? And why so young?

To make matters worse, there is an especially cruel irony in a scholar who made her life with words — Alice is a linguistics professor — losing the very mind that gave her those words. At one point Alice states that she would much rather have a cancer diagnosis. There would at least be hope, a chance to fight the disease. And with cancer comes a deep and wide network of social support. When it comes to Alzheimer’s, all one has is the stigma.

So why Alice? Let me state up front that any attempt to offer a comprehensive and definitive answer to that question is foolhardy at best and manifestly offensive at worst. But if it is beyond our scope to offer the answer, we can at least undertake a more modest route by proceeding like this. We begin by identifying putative goods that were acquired through the suffering which arguably would not have been acquired otherwise. Given that those goods come about through that suffering, we can argue that the goods provide at least a small part of the answer to the question: why that suffering?

What kind of goods am I thinking of? Well, consider what typically happens when people face a life-threatening diagnosis: they reorient their priorities. They recognize, for example, that spending time with family is more important than a job promotion and that healing fractured relationships trumps a new BMW.

It becomes clear as the narrative unfolds that Alice devoted a disproportionate amount of her life to developing her stellar career. She is Dr. Alice Howland, Professor of Linguistics at Harvard University. This identity is important, but Alice’s identities as wife and mother have suffered as a result. All this begins to change with the diagnosis.

Alice and her husband John were both dedicated to their respective careers. And as her disease develops it becomes increasingly clear that this was to the detriment of their marriage. As Alice’s decline continues — she has mere months of lucidity remaining — John receives a job offer in New York. He wants to accept it, to take Alice away from her home and children. Alice resists, begging John to remain in his current post so she may remain in familiar surroundings and close to the children.

Frustrated, John retorts: “If I don’t take this, I could ruin my one shot at discovering something that truly matters.” (234) What really matters? John, are you kidding me?

But before we’re too hard on John, let’s admit that his sentiment is understandable. He is doing important scientific work, and this is a great opportunity, and Alice is already in significant decline. Still, he speaks as a scientist concerned with his career, not a husband concerned with his declining wife. The fact is that like a refiner’s fire, Alzheimer’s brings to the fore the superficialities of John and Alice’s marriage and the importance of reorienting their priorities.

But the most profound and moving relationship unfolds between Alice and her youngest child, Lydia. Alice’s two older children followed her down the path of an all-consuming career. But Lydia has eschewed this path in favor of the life of a free spirited, struggling actor. This failure to conform to Alice’s expectations alienates Lydia from her mother’s all-too-conditional affections. It’s the kind of relationship that can just barely keep it together for a Thanksgiving dinner.

All that begins to change with the advent of Alzheimer’s. As her self-worth as linguistics professor is gradually taken from her, Alice begins to reorient herself back to the identity that matters most: mother. She realizes that a career is not nearly as important as loving and being loved. Rather than continue to alienate her youngest child, Alice begins to learn the beauty of unconditional, loving acceptance:

“You’re so beautiful,” said Alice. “I’m so afraid of looking at you and not knowing who you are.”

“I think that even if you don’t know who I am someday, you’ll still know that I love you.”

Is it really true?

As the Alzheimer’s progresses, Alice’s fears are realized. Eventually Alzheimer’s takes even the recognition of her beloved child’s face and Lydia is reduced to being “the actress.” At one point the actress performs for Alice:

The actress stopped and came back into herself. She looked at Alice and waited.

The actress squealed, rushed over to Alice, kissed her on the cheek, and smiled, every crease of her face delighted.

“Did I get it right?” asked Alice.