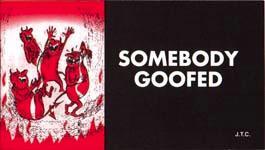 Jack Chick, fundamentalist pamphleteer extraordinaire passed away a couple months ago. Looking back, there was an undeniable brilliance to the man. Indeed, some days I am inclined to place him in the same rarified air as Andy Warhol and Roy Lichtenstein. No matter that Chick thought he was fighting tirelessly to rescue souls from the yawning jaws of perdition, he unwittingly produced fundamentalist art along the way. His pamphlets brilliantly capture the existential neuoses of the Christian fundamentalist in their haunting pages. And none does it with quite the panache and drama as Somebody Goofed.

So I was delighted to discover (through a recommendation from Dale Tuggy) that Somebody Goofed had been brought to life in this animated short. The film captures the tortured ethos of the tract with surprising verve and admirable sympathy. And perhaps best of all, it features an AMC Javelin as the final ride before eternal damnation. Though, in retrospect, I think a Dodge Demon might have been a better choice.