The other day a Twitter account called “Staunch Atheist” posted a cartoon which offered commentary on the Christian belief in crucifixion: 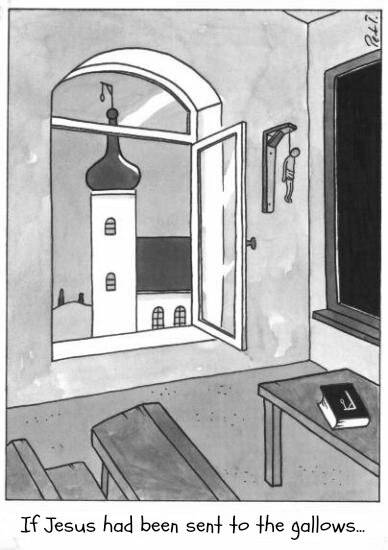 Within the context of this particular twitter feed, the posting was presumably intended to offer an irreverent and subversive critique of Christianity, one which might offend the sensibilities of Christians.

How ironic, then, that the effect is quite the opposite. Speaking as a Christian I’m happy to say that this cartoon isn’t irreverent at all. And the only subversion it offers is a laudatory take down of the cultural over-familiarity with the cross. Today the cross is a mere design motif, an item of jewelry. By contrast, the gallows still has the power to shock and offend. Consequently, by appealing to an intriguing counterfactual, this cartoon brings us right back to the scandal of the first century Christians.

In the ancient world there was no more shocking and shameful way to die. Indeed, the word excruciating derives from the meaning out of the cross. The cross was an utterly awful symbol, one sure to inspire horror and revulsion in any self-respecting Roman citizen. As Tom Wright puts it,

“if you had actually seen a crucifixion or two, as many in the Roman world would have, your sleep itself would have been invaded by nightmares as the memories came flooding back unbidden, memories of humans half alive and half dead, lingering on perhaps for days on end, covered in blood and flies, nibbled by rats, pecked at by crows, with weeping  but helpless relatives still keeping watch, and with hostile or mocking crowds adding their insults to the terrible injuries.” (The Day the Revolution Began, 54)

As horrific as this was, the early Christians inexplicably came to love this terrifying symbol. Wright describes the transformative impact that the cross had on Christian identity with the example of the great Apologist, Justin Martyr:

“One of the great Christian writers of the mid-second century, Justin Martyr, wrote glowingly about the way in which the cross is the key to everything. It is the central feature of the world, he said: if you want to sail a ship, the mast will be in the shape of a cross; if you want to dig a ditch, your spade will need a cross-shaped handle. That gives us a fair indication of the way in which even those who were trying to explain the Christian faith attractively to outsiders, didn’t shy away from the cross, but rather celebrated it.” (21)

Needless to say, this elevation of the horrifying cross to a place of pious worship is one of the truly extraordinary developments in ancient history. And from the historian’s perspective, it requires an adequate cause to explain the dumbfounding transformation in attitudes toward this horror. 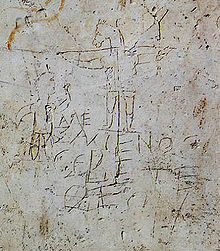 And of course, this remained a source of incredulity to non-Christians. As a case in point, virtually every work of early Christian history will include a picture of the famous “Alexamenos Graffito,” an item of third century graffiti from Rome which depicts a crude drawing of a man’s body with a horse’s head on a cross, complemented by a statement below: “Alexamenos worships his god.”

Yes, this is how many ancient Romans reacted to Christian piety toward the cross. So set against this backdrop, the attempt by “Staunch Atheist” to be subversive is anything but. Instead, it is a reminder of the shock and horror of the cross in the ancient world. And it leads us back again to ask that extraordinary historical question: what could lead a first century community to embrace an item of humiliation, torture, and death until it became perhaps the greatest religious icon of all history?

To sum up, the cartoon “If Jesus had been sent to the gallows” brilliantly reacquaints us with the scandal, and the miracle of the early Christian embrace of it. Rarely has an attempt at sacrilege had so felicitous an outcome.