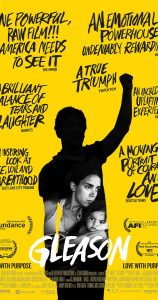 Over the last couple weeks I’ve heard a lot of people exclaim what a horrible year it has been. I admit that I’ve grumbled a bit myself. However, I won’t do so anymore. Gleason has a way of putting things into perspective.

This extraordinary documentary debuted earlier this year at the Sundance Film Festival. In a perfect world, Gleason would open wide at 4000 theaters while Suicide Squad would languish with one showing a day at the art house theater downtown. You see, nobody needed Suicide Squad, but the world needs a real superhero movie like Gleason. Anyway, the sad result of these inverted priorities is that we’re only learning about this film now, at the end of December. So to make up for lost time, watch it.

The film follows retired New Orleans Saint football player Steve Gleason and his family through five years of a diagnosis of ALS (Lou Gehrig’s Disease). Steve begins in 2011 with some tingling in his extremities. We leave him in 2016 wheelchair bound and breathing through a ventilator. More importantly, we leave him in awe of a courage, fortitude, and raw human inspirit that exceeds our mundane imagingings. The DC universe could learn a lot about superheros from this film.

From this day forward the Dictionary of Idioms will illustrate the expression “When life gives you lemons, make lemonade” with a picture of Steve Gleason. Really, that’s all you need. After his diagnosis he founded Team Gleason, a charitable organization devoted to improving the lives of those stricken with ALS by providing important technological aids. (They have since expanded their mandate to raise money for research to cure ALS.) In 2015 President Obama signed the Steve Gleason Act which secures Medicare/Medicaid funding for voice technology for those stricken with ALS.

It hardly needs to be said that Steve is a hero. But in the kind of strength-through-weakness paradox at the heart of Christian faith, Steve’s power often comes in his vulnerability. In one poignant scene Steve visits a newly erected statue in New Orleans which honors his storied football career. He later reflects that five minutes before he returned home that day, he defecated all over his wheelchair. Few people see that side of his heroic life. But he still shares it with us, and that in itself is extraordinary.

Needless to say, Steve’s caregivers are heroes in their own right. Chief among them is his long-suffering wife Michel. In one scene she insists she doesn’t want to be a saint. She only wants to be a human. Should we tell her that no saint ever set out with that goal in mind? They simply desired to love and help those in their midst.

Spirituality is a deep and rich seam to be mined in this film. Steve’s complex, painful, and poignant relationship with his father provides a catalyst for this theme to emerge. His dad appears to be a fundamentalist or charismatic Christian of some sort, one who wrestles with his own demons, including his fear that his son is not saved. In one of the film’s most heartbreaking scenes, Steve and Michel accompany his father to a faith healer’s healing service. Worth a shot, right? The speaker encourages the group to speak out their own healing (a practice that suggests he represents the aberrant Word of Faith form of charismatic Christianity). Steve bravely attempts to run in front of the congregation to illustrate that he is healed. The result is, to say the least, hard to watch.

In another agonizing scene, Steve, his language now severely incapacitated, shouts out to his father that his soul is saved and it hurts him deeply when his father suggests otherwise. His father asks for forgiveness and embraces his son in tears.

Steve Gleason may never be healed from ALS, but just the same Gleason is an extraordinary chronicle of healing, growth, heroism, and purpose cultivated in the midst of deepest adversity. This is a hero I can believe in.