In chapter 17 of God or Godless I argued that “God best explains the miracles in people’s lives.” My focus in the chapter was not on the concept of “miracle” as a violation in natural law or an event with no secondary cause or a gap in natural explanation. Rather, it was on the biblical concept of miracle as a sign of God’s presence and action in the world. The concept of a sign is fully consistent with alternative (including non-divine and wholly natural) explanations such as chance. But the question is this: what is the best explanation for the individual who undergoes the experience?

Let’s say, for example, that a person is a theist to begin with. Can events occur in that person’s life which, all things considered, serve as signs of God’s presence and action in the world? Certainly they can. In the above-mentioned chapter I provide a particular example drawn from the life of my friend, Bible scholar Kent Sparks. Below I relay another example, drawn from the life of Bill Muller, an elder statesman within the North American Baptist Conference. 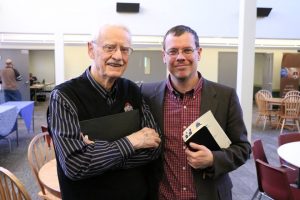 It was May, 1988. The semester had just ended and the choir from North American Baptist College was looking forward to an exciting three weeks touring Cameroon, a country nestled on the steaming tropical coast of West Africa.

The team was led by Dr. Bill Muller, a professor of the college for the previous twenty-four years. They had just arrived at Douala International Airport, exhausted after an arduous journey from Edmonton en route through Toronto and London.

After two solid days of flying and lingering in airports, Bill wanted nothing more than to reach their lodgings so the choir could prepare for their busy schedule in the weeks ahead.

But the anticipation of rest would have to be put on hold. Before they would be going anywhere Bill would have to get through customs. He looked up at the ragged line forming at one end of the terminal and took a breath. Navigating customs in western nations could be stressful enough, but in a developing nation like Cameroon it was a different affair entirely. While a customs inspection could go smoothly, more often it was a tense encounter in which the traveler was subjected to the agent’s whims. Would the agents decide to confiscate items? Charge duties? Refuse entry? The process was inherently unpredictable, and Bill was not looking forward to it.

While customs in Douala was unnerving under the best of circumstances, on this day Bill sensed his vulnerability all the more. As he entered the customs line toting a massive suitcase, he was feeling a bit like a deer in a forest full of wolves. This luggage was sure to garner the attention of the agents, crammed as it was with items requested by local missionaries: fluorescent light bulbs, anti-histamines, shoes, copier machine parts and ink refills. A zealous agent could choose to charge all sorts of arbitrary import duties for these items. And who could know what they might decide to confiscate. Since there was not much he could do but wait and hope for the best, Bill offered a simple prayer for safe and quick passage through customs.

Under the circumstances it was no surprise when, moments later, Bill found himself being directed by a female customs officer into a side room for inspection. Following her clipped request to open his luggage, Bill obligingly unzipped the cover and watched the official scan the contents. On the best case scenario the agent would draw up a quick list of duties to be paid, and send the traveler on his way. But instead she looked at Bill intently and made a request that he had not anticipated: “Receipts,” she said as she waved her hand over the open suitcase. “I need to see receipts for all these things.”

In a moment Bill felt his heart tumble into his stomach. He didn’t have receipts to demonstrate the cost of all these items. In a stomach-churning moment he realized his precarious position. Without receipts he was at the mercy of the customs agent who was free to charge whatever duties she deemed appropriate. As Bill explained his dilemma, the agent’s expression darkened. Then she crisply told him to wait as she spun on her heels and strode off, presumably to notify a senior administrator. And there Bill stood under the buzzing fluorescent lights, shoulders slumped, wondering how he would get the desperately needed items into the country without paying a crippling amount of duty. Again he offered up a quick prayer and waited.

As Bill stood there, he hardly noticed a young male agent walking by the inspection room. But for some reason the young agent noticed him. Suddenly he walked over to Bill and asked amiably, “Is there a problem?” It seemed a strange question. Of course there was a problem. Why else would Bill be left standing in a dingy customs inspection room with an open suitcase?

Bill nodded, and explained that the agent had left to fetch a supervisor. As he spoke, the young man’s eyes scanned the items in the suitcase. Then his attention shifted to Bill with a curiosity perhaps prompted by the unusual contents of the luggage. “Who are all these things for?” he asked. Bill explained that the eclectic collection had been requested by several Baptist missionaries who were working in Cameroon.

With that the man’s visage brightened. “Oh, have you been to Cameroon before?” Bill nodded and then went on to explain that he had been in the country for an extended trip the previous year during which he had visited over forty different towns. “Really?” the man exclaimed. “What sort of towns did you visit?” Immediately a dozen different names popped into Bill’s mind, but for no particular reason he blurted out: “I visited Fonfuka.”

“Fonfuka?” the man exclaimed with clear surprise. “And where did you stay when you were in Fonfuka?”

“I stayed with a man named Pa Simon.” Bill replied.

The officer’s eyes widened. “Oh? What kind of house did Pa Simon live in?”

“It was a nice home,” Bill recalled. “His children had built him the house for his retirement.”

Bill was puzzled, for the officer’s apparent amazement seemed out of proportion to the mundane information Bill was sharing. “And was Pa Simon married?” he asked.

What was the point of this line of questioning? Was the agent just curious or did he have another motive? More ominously, was he trying to lay some sort of trap? Bill had no idea, but he figured the wisest course would be to answer the questions honestly without trying to figure out where they might be leading. So he nodded obligingly. “Yes,” he said, “Pa Simon was married. I remember that his wife was suffering with boils on her shins at the time.”

With that the officer rolled back on his heels and looked at Bill stunned. Then he spoke. “That was my mother,” he said in a whisper. With that startling revelation his face took on a warm countenance and he placed a hand on Bill’s shoulder. “God bless you, my brother. Close your suitcase. You may go.”

Bill stood there for a moment, stunned. What had just happened? While still dumbfounded he closed the zipper, still anxious that the agent might change his mind. But when he glanced back he could see the agent, smiling and giving him a friendly wave. And that was it: he was through customs.

Bill was amazed. Cameroon was not a small country. At the time that he visited in 1988 it had a population of fourteen million people while the capital of Douala had more than one million. What were the chances that this particular agent would walk by at the precise moment of Bill’s inspection? And what prompted him to stop and inquire about Bill’s case? And why had he asked which towns Bill visited? And why, of the dozens of towns Bill had traveled to, did he mention Fonfuka?

Even as all those questions popped into his mind, Bill mused that he really knew the answers. As the students gathered around him and they moved out of the airport terminal and into the humid tropical air, he quietly offered up a heartfelt prayer of thanks.