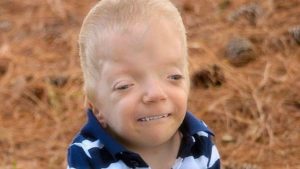 Many things have happened this week which would be sufficient to induce that misanthropic state of mind. But this week the straw that broke this camel’s back came with the story of Grayson Smith, a terminally ill three year old who suffers from more life-threatening medical conditions than most people will ever have to face.

And still he smiles.

In particular, he smiles in the picture where he is holding a pumpkin, the same picture that became a vicious internet meme mocking his facial deformity with the catchphrase: “That face you make when your parents are actually cousins.”

But as embarrassing, infuriating, and callous as I find the anonymous internet trolls, I find their inhumanity to have met its match in Grayson Smith himself, a child whose bravery, strength, and winsome smile leave me in awe.

So on second thought, maybe being human isn’t so bad after all.