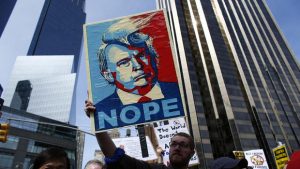 In my article “God Bless the Peaceful Protesters” I noted that Christian conservative radio personality Michael Brown had chastised the anti-Trump protesters who were obstructing traffic in several US cities. I then recounted that I had asked Brown whether he would extend that indictment to Operation Rescue, a prolife organization that has a long history of civil disobedience on behalf of the unborn. I noted at the time that Brown had not yet responded to my question.

He has since responded and I thought it would be worth recounting his response and noting some potentially surprising implications that follow from it. I’ve included the essence of our exchange below:

@DrMichaelLBrown Thanks for following up. OR has a history of civil disobedience. Would you object if a prolife protest disrupted traffic?

@RandalRauser If that could save a human life, sure; I don't see how a protest simply to disrupt traffic stops an abortion from taking place

@RandalRauser Can't debate now, but having participated in OR, I find zero connection between OR & the current demonstrations.

@DrMichaelLBrown The folks protesting now want to change the culture too. My simple point: the divide isn't as great as you suppose.

So here’s the main point: Michael Brown would approve of civil disobedience including protests that disrupted traffic if doing so was aimed at changing the culture and saving lives. To be sure, Brown did not say those criteria are necessary to justify a protest, but they are sufficient.

My simple point is that protests against Trump can be done for this very purpose. To begin with, as I noted in our Twitter exchange, those who protest are surely seeking to change the culture. But what about saving human lives? Could protesters be motivated by so lofty a goal as this?

Certainly. Just consider Trump’s promise to repeal Obamacare. Over the last few years Obamacare has saved many lives. These are people who would be dead now but for the coverage provided by the Affordable Care Act. If millions of Americans lose medical coverage under a Trump administration, many of them could ultimately lose their lives.

Thus, if we accept Brown’s criteria then the desire to change the culture and save Obamacare in order to save lives provides a sufficient reason to engage in civil disobedience and disrupt traffic.

One final thought: I wish that more Christian conservatives would extend their concern for the unborn fetus to other threatened and marginalized groups including the uninsured and  under-insured.