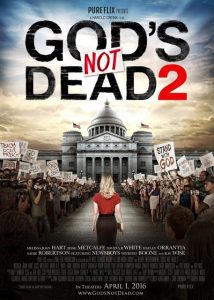 It should be no surprise that the critics lampooned God’s not Dead 2: it received an abysmal 9% average from Rotten Tomatoes. So why, as my review title suggests, would I think the dearly departed (and dearly missed) Roger Ebert could well have given the film four stars, his highest rating?

Simple. Ebert famously reviewed films relative to genre and audience expectation. He could just as well bestow his coveted four star rating on a romantic comedy or supernatural horror as a lofty family drama. And God’s not Dead 2 is a perfect example of its genre.

In the film, a young blond Christian public school teacher named Grace Wesley is attacked by a basket of anti-Christian deplorables including her own school board and teachers’ union, a bile-filled atheistic ACLU lawyer, and a fiercely antagonistic liberal media. Her crime? Simply daring to answer a student’s question about Jesus.

The ACLU lawyer in particular embodies the evangelical’s paranoid projection of Christian-hating liberals. Before the trial begins he snarls, “We’re going to prove once and for all that God is dead.” (Yup, definitely sounds like the ACLU!) Later he confronts Grace’s lawyer with the icy threat: “I hate what people like your client stand for.” And so when Grace’s lawyer says that people view her Christian faith as a plague on society that needs to be eradicated, you know he isn’t exaggerating.

(Madalyn Murray O’Hair must be spinning in her grave.)

As the film builds toward its emotional climax, Grace’s lawyer appears to turn on her by questioning her as a hostile witness. The scene is a bald attempt to recreate the high courtroom drama of a film like A Few Good Men — “You can’t handle the truth!” — as the lawyer uses the ruse as a bald opportunity to impugn the judge, the court, and the entire society for its unabashed anti-Christian bias.

Needless to say, Grace wins the trial as the Newsboys make their entry to play another concert which is wholly gratuitous to the plot. Before the credits roll, Christians everywhere are reminded that God is good and most definitely not dead.

If that’s your thing then you’ll love God’s not Dead 2. After watching it you’ll be convinced that conservative American Christians are under relentless attack from the forces of evil, also known as atheists, the ACLU, the judicial system, the media, and the secular university system. (The film goes out of its way to impugn the “Ivy League” schools in particular; in contrast, the Newsboys concert appropriately occurs on the campus of for-profit Christian juggernaut Grand Canyon University.)

After watching God’s not Dead 2 you’ll be so concerned that the liberals and atheists are out to get you and your fellow Christians, you won’t even notice the very real threats currently being directed at the Muslim-American community. To note some examples, this past week President-elect Donald Trump chose Michael Flynn as his National Security Advisor, even though Flynn has insisted that Americans should be afraid of Islam (not Islamic radicalism, but Islam itself) and further that Islam is really a political ideology rather than a religion. (This latter claim is particularly troubling as it sets the stage for challenging the religious freedom currently granted to Muslims.)

God’s not Dead 2 will make you so wary of the ACLU’s conspiracy to make Christian bakers sell cakes with two grooms that you won’t even notice that Trump surrogate Carl Higbie just defended Trump’s proposed Muslim registry by appealing to the precedent of WW2 Japanese internment camps.

You’ll be so fearful that saying “Jesus” at work might get you fired that you won’t bother to notice that the President-elect himself has a long history of demonizing Muslims as in his infamous declaration, “I think Islam hates us.”

But even if you were aware of the growing persecution of Muslims, God’s not Dead 2 would make sure you didn’t care, because the persecution of Christians is what really matters. To drive the point home, at one point in the film Grace’s grandfather Walter (Pat Boone) observes that “The most basic human right of all is the right to know Jesus.” Just so we’re clear, the most basic human right has nothing to do with freedom of conscience or freedom of worship, per se. Rather, it has to do with the right to worship Jesus. In other words, too bad for you Muslims.

So if Christian propaganda films are your thing, then you can do no better than God’s not Dead 2. That’s why it received a stellar “A” rating from Cinemascore (a firm that polls average film goers). “Us against them” was never so satisfying.