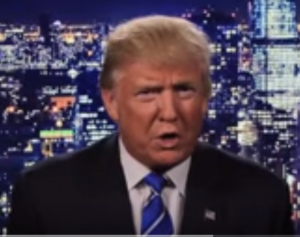 Donald Trump issuing his non-apology apology before he pivots to blaming the Clintons.

Many people (Republicans mostly) were apparently shocked by the latest debacle to unfold on Donald Trump’s long road to perdition: I speak, of course, of the 2005 Access Hollywood footage. This kind of disgusting glamorization of sexual assault might be expected in the high school locker room. It’s a bit more shocking coming out of the mouth of a man who was pushing 60 at the time. It’s even more shocking coming out of the mouth of a man who is now running for president. But to anybody who has paid attention to Donald Trump over the last sixteen months, it can hardly be surprising. The man has shown himself time and again to be a boorish, misogynistic orange pig. When he opens his filthy mouth the sailors blush. When he walks into a room of fence posts, the collective IQ drops. Yesterday the devil himself tweeted that he would now be voting for Gary Johnson.

But you know who remains steadfastly behind Trump? Evangelicals. “Duck Dynasty” star Phil Robertson barked that the real problem is the Clintons: “That’s about the most ungodly bunch I’ve ever seen.” But as for Trump he says, “lighten up … and give him some time.”

Radio host Rita Cosby soothingly noted that Trump’s “a sinner, that’s a start”. Then she added, that we should “not condemn anybody.” (Except that ungodly Clinton bunch, of course.)

Pastor Mark Burns (that huckster who faked his degree and credentials to build his online “ministry”) leapt to Trump’s defense because the man had “repented and God has forgiven him…so should you.” (See this NBC article for all the above references.)

By the way, I wonder if Trump “apologizes” to Melania like that. (After all, they were married at the time.) “Well Melania, I’m sorry if you were offended that I talk about grabbing the crotches of other women, but Bill Clinton did worse back in the 90s!”

You might say, “Okay, but that’s just an obscure charlatan-preacher, a little-known radio host and a wacky reality television star. They don’t exactly represent the mainstream of respected evangelical opinion.”

Well, I dunno about that. But anyway, we also have folks that certainly are respected leaders in evangelicalism like Tony Perkins (President of the Family Research Council) and Ralph Reed (chairman of the Faith and Freedom Coalition).

Perkins insisted that he is unconcerned because his support for Trump is not based on shared values. It is based on shared concerns regarding issues like the Supreme Court, Islamic terror, blah blah blah.

Let that sink in. The President of the Family Research Council is unconcerned that the man he is supporting for president delights in grabbing the crotches of women and forcibly kissing them. And note that he justifies this claim by dismissing the importance of values in the candidate. That is extraordinary. Whether you agreed with them or not, at least evangelicals used to insist that the values of the candidate mattered. Now the end justifies the means.

As for the cherubic Ralph Reed (who always reminded me of Alfalfa from the Little Rascals), he dismissed the relevance of the recording:

“I’ve listened to the tape, my view is that people of faith are voting on issues like who will protect unborn life, defend religious freedom, create jobs, and oppose the Iran nuclear deal.

“I think a 10-year-old tape of a private conversation with a TV talk show host ranks pretty low on their hierarchy of concerns.” (See this Huffington Post article for these references.)

Perhaps the most horrifying thing is that Reed may be right. Recent surveys show that 80 percent of evangelicals support Trump, and if the last sixteen months have not given them cause to withdraw that support, I’m hard pressed to think that this latest moral horror will. Indeed, reporters are already reporting the inevitable “that’s how men talk” rationalization is being circulated. (For the record, that’s NOT how men talk. That’s how morally arrested misogynists talk. If Trump wasn’t rich and famous he’d merely be a dirty old man with straw hair and an orange hue.)

All this leads me to ask the question: should I continue to call myself an evangelical? The term has had baggage for a long time. In his book What’s so Amazing About Grace? Philip Yancey recalls that whenever he would ask people to give their response to the word “evangelical” they would reply with impressions like “judgmental” and “anti-abortion” and “anti-gay.” Not once, he noted, did folks think of love or grace.

Sigh, those were the good old days! Today evangelicals are increasingly known for their uncritical embrace of a hopelessly racist, misogynistic, psychopathic, corrupt, pathologically lying bully. And they’re known for a defense of him and demonization of the Clintons that is so crass it provides a dictionary definition of hypocrisy and moral blindspot. For example, they readily forgive Trump for his brutish actions of a decade ago but they refuse to forgive Hillary Clinton for her husband’s brutish actions of two decades ago. Go figure.

(By the way, I don’t look at the Clintons with rose-tinted glasses. The excerpts of Hillary’s Wall Street speeches that were just published by Wikileaks are damning indeed. Oh Bernie, what could have been!)

So here’s where we are. The term “evangelical” is now so corrupted, so decayed, so rusted-out, and so laden down with the moral garbage and hypocrisy of the last sixteen months, that I suspect it is best that we part ways.

Evangelical? No thanks. Just call me a follower of Jesus.