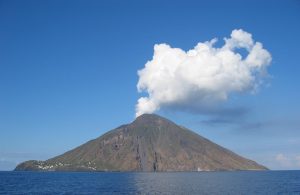 In “The depth of current atonement debates in a tweet” I noted one of the deepest divisions in current Christian debates on the atonement. Some Christians (advocates of penal substitution) believe that Jesus’ atoning death satisfies the wrath of the Father against sin, and thus that Jesus’ death provides the culmination and completion of the temple sacrificial system.

Other Christians counter that this entire picture reveals a primitive and pagan conception of deity as requiring blood satisfaction. According to these dissenters, Christ died not to satisfy God’s wrath but rather to expose as false the very notion of God needing to satisfy his wrath, either by visiting that wrath on the guilty party or on an innocent party to whom that wrath has been transferred.

The difference can be illustrated with the standard story of the South Pacific islanders who believe an innocent virgin must be tossed into the mouth of the volcano to satisfy the Volcano God so that he will not erupt and thereby smite the people for their sins.

By contrast, the detractor of penal substitution denounces the actions of the South Pacific islanders just as he denounces the sacrifices in the temple. The latter needlessly claimed the lives of countless animals; the former needlessly claimed the life of an innocent virgin. Far from serving as the culmination of this system of divine/human relations, the cross instead reveals it to be based on an errant sense of divine justice and mercy.

If one of these two views were a tiny fringe in the church, you might be able to dismiss it. Unfortunately, these two diametrically opposed views of atonement are both well established and widely held in the church. This raises a rather glaring problem. In John 16:13, Jesus says: “When the Spirit of truth comes, he will guide you into all the truth, for he will not speak on his own authority, but whatever he hears he will speak, and he will declare to you the things that are to come.” To be sure, a passage like this provides no guarantee that the church will come to agreement on all things. But mightn’t we expect that it would come to agreement on something as central as the meaning and significance of the very Gospel itself?