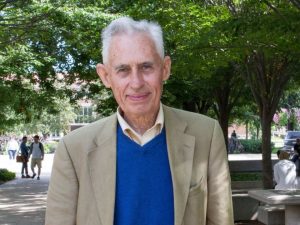 Whoa, have things gotten heated among the Christian philosophers recently. It all started a couple weeks ago when esteemed philosopher Richard Swinburne was invited to give an address to the Midwest Society of Christian Philosophers Conference (September 22-24). Swinburne is arguably (or inarguably!) one of the two most influential living Christian philosophers (Alvin Plantinga being the other). And on this occasion the esteemed academic came to deliver a paper titled “Christian Moral Teaching on Sex, Family, and Life.”

Then all hell broke loose.

Okay, that’s probably an overstatement, but the paper did cause offense and fallout like few philosophical papers this side of Peter Singer ever do. The controversy was so great that Michael Rea, President of the Society of Christian Philosophers and previous guest on The Tentative Apologist Podcast, took to Facebook to offer a disclaimer in the wake of the fallout: 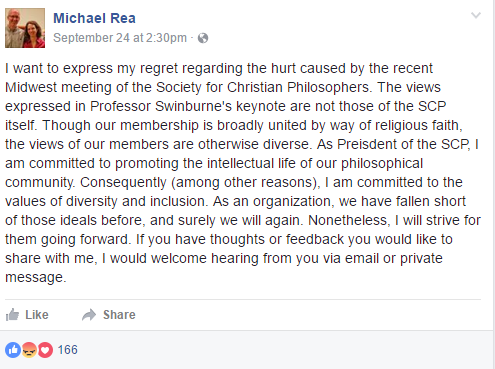 This is an extraordinary statement, one which looks to me like a rebuff of one of the world’s leading philosophers after he delivered a paper on a prearranged topic.

So what did Swinburne say that was so offensive? The problem, it appears, is centered on his reference to homosexual orientation as a disability. Here’s an excerpt from the paper:

The fact is, however, that while the description is neither pastorally sensitive nor politically correct, it is not intended to be. After all, the term is precisely defined and functions within a rigorous argument in a conference paper in academic philosophy. Moreover, it is part of a long history of natural law treatments of homosexuality in the western philosophical tradition.

Needless to say, conservative Christian philosophers have expressed their own dissatisfaction with this quick resolution of the problem, both in response to the poor treatment of Swinburne and, even more importantly, to the implications this has for academic freedom. If Christian philosophers face censure within the Society of Christian Philosophers for articulating a dispassionate philosophical critique of homosexuality, then where can they express those views?

Not surprisingly, Edward Feser provided an excellent response to Rea and the SCP with which I am in broad agreement. There is also an open letter to the SCP on the “Swinburne Controversy” which addresses both the issues of academic freedom and the treatment of Swinburne. It currently has almost one hundred signatories.