Believe it or not, this is the fiftieth anniversary of the 1966 original release of It’s the Great Pumpkin, Charlie Brown. And that, I think, is worth an article.

The special aired every autumn on CBS until 2001 when the rights went to ABC.  So for me, the program is inexorably connected to CBS, and in particular to the CBS special presentation logo which prefaced every Charlie Brown special:

To begin with, I love their minimalist animation and vibrant colors. One of my favorite scenes in Great Pumpkin is the very first as Lucy and Linus emerge from their house while the sun hangs red and low in the sky, illuminating the scene in the warm, pink hues of a late autumn afternoon. The scene is lonely and melancholy and brilliantly conveys the transition of seasons as Lucy and Linus are framed between the house and the gnarled and slightly ominous apple tree. 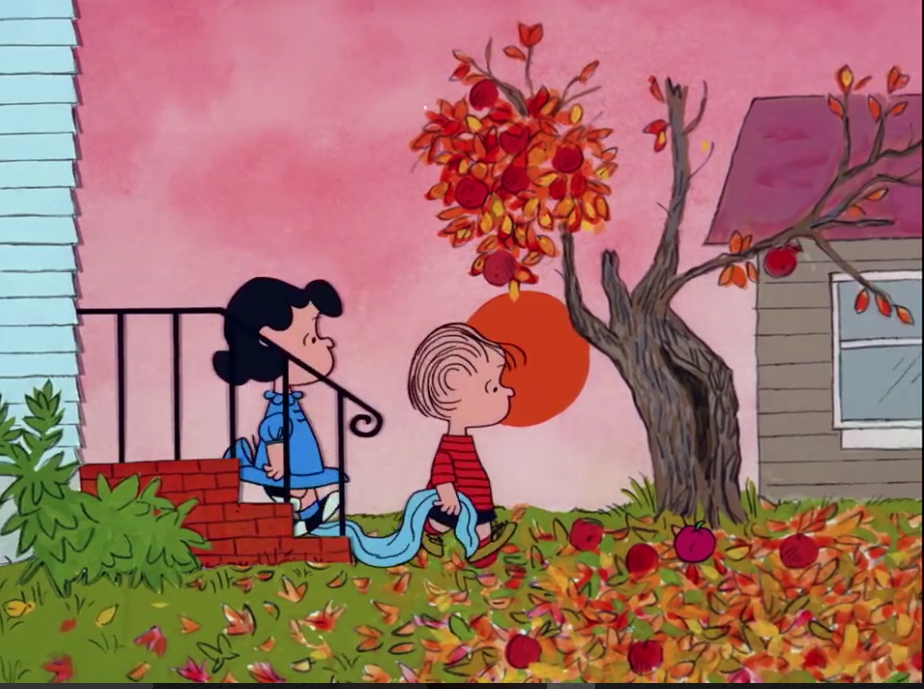 Lucy and Linus emerge into the autumnal beauty of the world of Peanuts.

Second, I love the music. Charlie Brown is inextricably linked with the illimitable musical scores of the Vince Guaraldi Trio. A few years ago I heard an interview with Jerry Granelli who played with the trio for the recording of the original soundtrack for A Charlie Brown Christmas (my favorite Christmas album of all time, by the way). A mere 24 years old at the time, Granelli could not imagine that an afternoon’s recording session would be career defining. When you consider the musical score of the typical Flintstones or Looney Tune of the time, it is quite extraordinary that avant-garde jazz music would be featured as the musical score for a Peanuts animated special. But the results were sheer genius.

Sometimes lightning does hit twice, and this is one of those cases. That which worked for A Charlie Brown Christmas was repeated with It’s the Great Pumpkin, Charlie Brown. Melancholy and forlorn but without the cliched boos and cackles and whistling wind of your typical Halloween score. My favorite part of the score in Great Pumpkin are the lonely strains that haunt the dark spaces as Snoopy steals across a war torn France of his canine imagination. Brilliant. 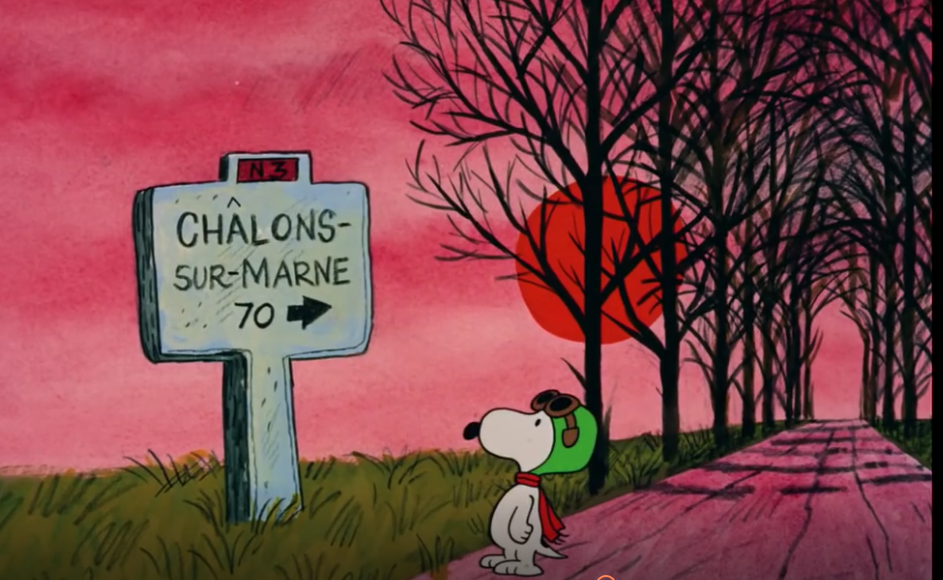 Finally, one must recognize the incisive and humorous dialogue and life situations that characterize both these specials. In Great Pumpkin the existential struggles of Charlie Brown return at regular intervals from the moment Lucy tricks him once again into trying to kick the football to his poorly designed ghost costume (with way too many eyes) to the bag full of rocks he receives for his efforts trick or treating. Life never seems to go the way Charlie had hoped.

But the real loser in this special is not Charlie Brown, it’s Linus. He gives up much for his belief in the Great Pumpkin: trick or treating, a Halloween party, the respect of his friends, and even his warm bed.

And it is with Linus and his devout belief in the Great Pumpkin that things get interesting from a religious and philosophical perspective. Early in the show Linus explains to Charlie Brown that the Great Pumpkin rises from a pumpkin patch every Halloween and flies around giving toys to all the children. Exasperated, Charlie replies, “You must be crazy. When are you going to stop believing in something that isn’t true?”

Linus snaps back with the perfect rejoinder: “When you stop believing in that fella with the red suit and white beard who goes ‘Ho ho ho!'”

Well yes, there’s that. But from the perspective of epistemology and religion there is more to be said. In his famous 1983 paper “Reason and Belief in God,” (which you can read here) Alvin Plantinga provides his first substantive exploration of the idea that belief in God might be considered properly basic, and so rational apart from supporting evidence. But if that is the case, why not belief in something else which is plainly crazy? Plantinga famously puts the objector’s protest in the terms of the Great Pumpkin Objection. If belief in God is rational, why not Linus’ belief in the Great Pumpkin?

Well yes, why not? Interestingly, Linus never tells us where he gets this belief from. Was it arrived at through the testimony of someone else? Did he just wake up one day with a firm conviction that there is such a benevolent gourd? Without more information it is difficult to form any definitive judgment on the rationality of his belief.

But one thing would seem to be clear. The Great Pumpkin never shows up. And that would seem to provide a defeater to his belief, one which would undermine its justification. 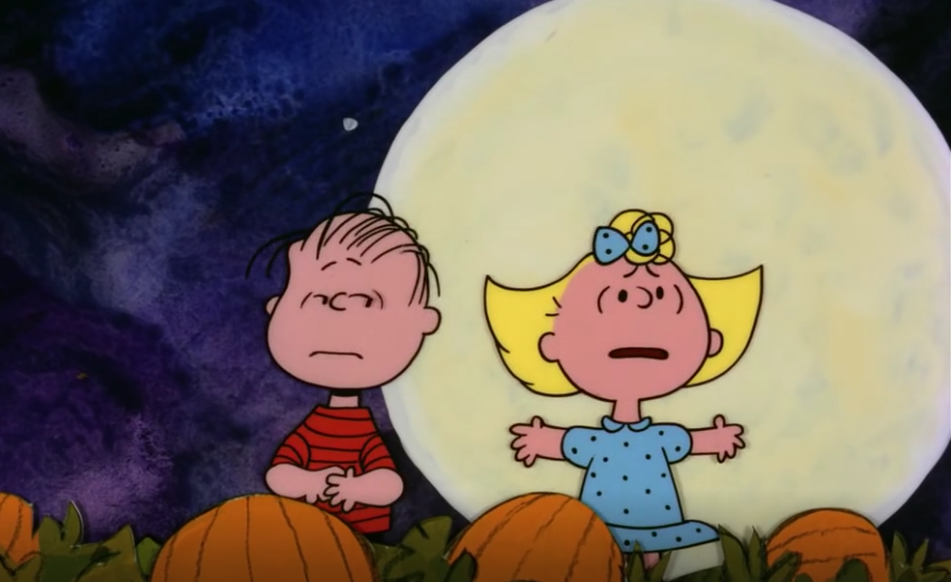 Linus facing the wrath of Sally, and his own impending demoralization, when the Great Pumpkin doesn’t show.

Or maybe not. Linus never guaranteed that the Pumpkin would rise from his patch. That was a qualified hope based on the sincerity of his own belief and that of the pumpkin patch itself. (Though Linus never explains how a pumpkin patch can be sincere.) When the other kids show up after the Halloween party to poke fun at Linus, his belief wavers just enough to call into question his own sincerity and faith. And that, in turn, is enough to explain why the Great Pumpkin is a no show for yet another year. Linus, it could be argued, was just not faithful enough.

No doubt critics of religion will insist a parallel between Linus’ failed beliefs and those of the religiously devout in matters such as unanswered prayer.

And is Charlie Brown still getting a bag of rocks?

You can watch this timeless holiday classic online here: