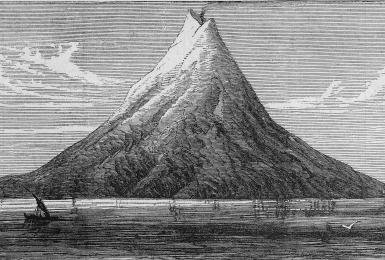 I’ve been fascinated by volcanoes since May, 1980. We were outside playing during recess when the late spring sky began to snow. Except it wasn’t snow, it was ash from the recently exploded Mt. St. Helens. (Living in south central British Columbia, we were a good day’s drive away from the volcano. But that was close enough.) According to the Volcanic Explosivity Index (VEI), the Mt. St. Helens eruption just barely qualified as a 5. By contrast, the 1883 explosion of Krakatoa was far larger: it measured a six on the VEI and it claimed over 36,000 casualties both from the immediate effects of the explosion and the tsunamis that resulted.

Over the last few days I have enjoyed reading Simon Winchester’s 2003 book Krakatoa: The Day the World Exploded: August 27, 1883 (New York: Harper Collins). The book tells the story of a volcanic explosion so monumental that it has worked its way into the public consciousness like few natural disasters in modern history. To give you a scale of the eruption, consider this fact: the sound — described as “the roar of heavy guns” — was recorded 3000 miles away on the island of Rodriquez near Africa. Winchester observes, “the 2,968 mile span that separates Krakatoa and Rodriguez remains to this day the most prodigious distance recorded between the place where unamplified and electrically enhanced natural sound was heard and the place where that same sound originated.” (260) That’s equivalent to hearing an explosion from New York while walking down the street in Los Angeles.

Winchester’s book is a melding of history and science, but I read it with an eye for theology and philosophy. As you can imagine, there is an ancient and rich mythology of volcanoes:

“In very early times this wonderment was answered, inevitably, mainly by religion and the making of myths. Volcanoes were hills occupied by temperamental gods: They could be appeased by frequent sacrifice. The appeasing flesh could be that of a young human (a small child thrown every twenty-five years into the crater of a particular Nicaraguan volcano, for instance, would guarantee its quietude) or an animal (Javanese today toss chickens into the crater of Mount Bromo–superstition still plays an important role in East Indian attitudes toward their volcanoes.” (300)

The science of plate tectonics which finally brought the nature of volcanoes into focus only emerged in the mid-1960s. Interestingly, Winchester quotes from the last major book to be published on Krakatoa, a book that was published in 1964 just prior to the completion of this science and the advent of real geological understanding. Winchester observes that “The book begins to speak in terms of ‘The Demon’ going in to ‘press the attack,’ his ‘searching fingers boring into the defenses,’ and the ‘pent-up energies of time’ and ‘primeval forces’ readying themselves to do battle. One can hardly blame him [the author]. Neither he nor anyone else had an inkling of what really caused Krakatoa. And that was hardly his fault: he was simply a very few years too early.” (311)

These quoted passages nicely illustrate why many atheists insist on claiming science as their own. When we don’t understand a physical process, we search for another explanation, one in terms of mind. We may literally place a raging deity within the mountain. Or, if we believe we’ve become too sophisticated for such mythologies, we will retreat to anthropomorphized, quasi-poetic speech of demons, searching fingers, and primeval forces.  But if we press on, the demons and gods dissolve into the slow grinding forces of convection and subduction. The ghost has been exorcised, and all that remains is the machine itself, terrible, and awesome, in all its glory.