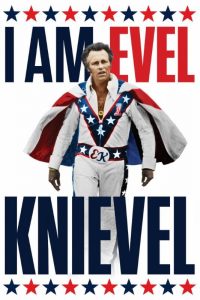 There’s a fine line between courage and foolhardiness.

Or maybe there isn’t.

After watching the 2014 documentary I am Evel Knievel I’m not so sure anymore.

The film tells the story of one of the cultural icons of my youth. Bob Knievel grew up in a rough western town — Butte, Montana — one of those wayward youth who was, as they say, “known to police”. Determined not to spend his life laboring deep in the mines surrounding Butte, Bob eventually settled on something more glamorous: the life of the daredevil.

Evel began to build his show in the mid-1960s culminating in a daring jump over old cars or boxes of snakes, whatever was available and sure to hold the attention of an audience. His breakout moment came after the budding entrepreneur secured a high-profile jump outside dazzling Caesars Palace, Las Vegas, on New Years Eve, 1967. Evel cleared the jump … and then flew off the bike, bouncing and flipping like a rag doll until he came to rest unconscious on the ground. And a legend was born.

It’s difficult to pick the height of Evel’s career. It could be the 1974 “jump” over the Snake River Canyon, for which Evel traded his standard Harley Davidson for a rocket. (The chute deployed early, leaving Evel to descend into the canyon below.) Or it could be his ill-fated 1975 Wembly Stadium jump over thirteen buses, or his comeback six months later when he jumped over fourteen buses in Ohio. (Personally, my favorite moment is the brawl with the Hells Angels in Los Angeles. Forty Hells Angels may be tough but they are not tougher than 20,000 angry Evel fans.)

The jumps may have brought the fame, but the licensing deals brought the money. In the mid-1970s toys and comic books emblazoned with Evel’s trademark image were the biggest sellers (I remember playing with the toys and reading the comics).

But it was all to come crashing down (if you’ll pardon the pun). Evel was a hard drinker and a notorious womanizer. When a man wrote a tell all expose, Evel retaliated by breaking his arms with a baseball bat. The licensing deals disappeared, Evel was no longer featured on ABC’s Wide World of Sports. And then a divorce from his long-suffering wife. By the 1980s the aging daredevil was all but broke, financially, that is. Of course, he was also broke physically: The Guinness Book of World Records recognizes Evel as the world record holder for bone fractures (433 fractures by late 1975, but who’s counting?).

By the mid-2000s, in near constant pain and suffering from several medical conditions, Evel decided he needed to change his life. In 2007 he was baptized by Robert Schuller on the Hour of Power. Shortly after he died. At his funeral at the arena in Butte, Evel’s final words were read out to those gathered. After recalling all those he had hurt and offended he closed with these simple words: “I’m sorry.”