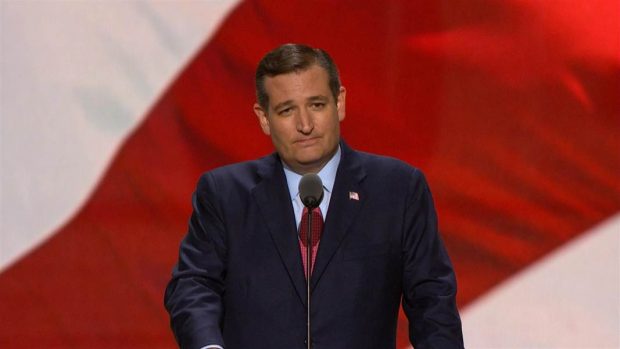 Ted Cruz has been lambasted for refusing to nominate Donald Trump at the GOP Convention yesterday. The most persistent criticism I heard is that Cruz violated a rule of etiquette. As one pundit on MSNBC put it, “Ms. Manners would not be happy.” But what is the problem, exactly? In short, Donald Trump extended hospitality by inviting Cruz to speak at Trump’s convention, and Cruz responded by trying to undermine Trump. And that, as another pundit put it, is akin to “eating the meal and then pissing on the rug.”

Before I offer a modest defense (and accompanying critique) of Ted Cruz, let me acknowledge that the man has a smugness about him that many people find deeply alienating. Also, let’s acknowledge that his decision to deliver the speech he in fact gave is likely part of a broader calculated strategy to further his political career, including laying the foundation for a 2020 campaign.

The smugness is what it is, and as for Machiavellian calculation, let me pose the obvious question: who among us has wholly pure, disinterested motives? And which politician, in particular, doesn’t have skin in the game? In short, smugness and self-interest merely distract from the fundamental question: did Ted Cruz violate some dictum of hospitality?

Yes, he did. But that merely forces us to ask the next question: did he have morally sufficient reasons to do so? You see, one essential aspect of the moral life is the proper navigation of those moments in which we find our moral obligations in conflict. In this case, Cruz had a couple obligations coming to the convention: (1) honor his pledge to support the nominee; (2) barring a full endorsement, at least deliver a speech that is minimally not attempting to undermine Trump.

Cruz failed to meet both those obligations. Indeed, he flouted them in rather grand style. But he did so while professing the conviction that Trump is not a true conservative and that he presents a threat to the United States. I agree with him. I believe Trump is a huckster, a showman, and a psychopath. On that third charge Tony Schwartz, the ghostwriter for Trump’s 1987 bestseller Art of the Deal, agrees with me. In an explosive interview with the New Yorker just this week, Schwartz stated he believes Trump is a “sociopath” who presents an existential threat to the United States, and indeed to the world. He states: “I genuinely believe that if Trump wins and gets the nuclear codes there is an excellent possibility it will lead to the end of civilization.” (Not surprisingly, Trump is now threatening to sue Schwartz.)

I don’t know if Cruz shares Schwartz’s dire projections about a Trump presidency, but I am persuaded that the concerns he does have are sufficient to trump (no pun intended) his obligations to honor his pledge and not undermine the candidate.

This leaves me with one remaining question: was the speech yesterday the most effective way for Cruz to oppose this psychopathic showman? Given the trite quibbling over etiquette and Ms. Manners, I fear it was not.