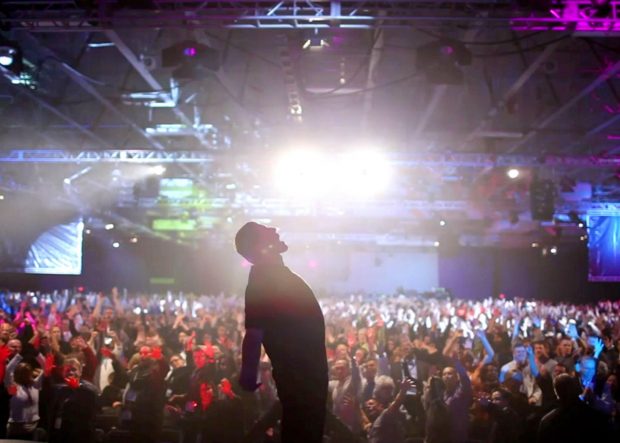 Last week Netflix debuted a new documentary on self-help guru Tony Robbins titled I am Not Your Guru. I have never paid much attention to Tony Robbins. But he’s nonetheless been a ubiquitous presence in the pop culture backdrop, so I was intrigued to take a closer look at the man.

The setting is an annual conference in which folks from around the world gather in Florida for a few days of Dr. Phil 2.0. The documentary follows Robbins through this hugely popular seminar which attracts 2500 eager participants, each paying a $5000 fee.

Robbins has been doing the life coach thing since he was 18, all without any formal post-high school education. But what he lacks in degrees he makes up in charisma, an undeniable emotional intelligence, and a booming voice and presence that command attention.

That charisma, EQ, and presence demand a steady and penetrating scrutiny in a film like this, so it was very disappointing to realize that director Joe Berlinger had already drunk the Kool-Aid. It’s not that I was looking for an exposé (but if the shoe fits…). However, this documentary felt like an extended promotional video with Berlinger reduced to the lowly role of fanboy.

But while I am Not Your Guru lacks a critical eye toward its subject matter, it nonetheless does present a riveting portrait of a complex personality. I had always written Tony Robbins off as something just this side of a bloviating snake oil salesman. I can no longer do so. I am now persuaded that he really does want to help people and he is gratified when he makes a difference.

At the same time, there is something about the whole shtick that triggers my Spidey senses. In a crowd of 2500 people, Robbins seems to have a particular burden for helping youngish, attractive women with some Dr. Phil insights and culminating in a long hug complemented by rapturous applause from the devotees. The whole show reeks of a cult of personality.

Admittedly, folks seem to have an amazing time as the retreat setting replicates the intoxicating experience of camaraderie that comes with summer camp. But alas, summer camp included Smores and canoes … and it never cost 5k.

Robbins’ first interaction in the film is with a young lady whom, we soon discover, is estranged from her drug addict father. Robbins argues that she should be thankful for her drug addict dad and his manifest failings because he unwittingly made her the strong young woman that she is. The message, in short, is that we experience trials so that we may become better people, a claim familiar to all those who know the Greater Goods Theodicy. 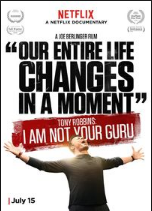 Later Robbins meets another young lady that was psychologically destroyed as a child being raised in a sex cult in which all members 6 years and older were obliged to provide sex to other members. It’s interesting to see that he doesn’t invoke the same message he used before: its a tacit admission that there is something unseemly with attempting to explain years of child rape as the forge for one’s present character.

Throughout the film it is fascinating to see how much a Tony Robbins seminar echoes a charismatic church service. The frenetic music, lights and smoke, the charismatic leader who steps into the crowd to bring healing to afflicted audience members, and the promise of a Damascus Road conversion or healing by the end of the night.

The most glaring differences between Tony and the charismatic preacher is that Tony dresses down (no white suits) and he swears, wow does he ever! F-bombs galore: Tony says it is part of his technique.

I have no doubt that Tony Robbins does help people, especially those that are young, attractive, and can afford the $5000 entry fee. But if you can’t afford Tony Robbins, church is free, summer camp is relatively cheap, and Dr. Phil is on every weekday afternoon.