I wrote this article for the TWU Today Newspaper back in the spring of 1996. The topic was a timely one for me as I had just interviewed Mark Emery as my subject for a class I was taking in culture change. In the class we were assigned the task of interviewing somebody who was aiming to change the culture. I suspect most people would have interviewed a pastor or Christian social worker. I decided to think outside the box by interviewing Emery, an avowed anarchist who was devoted to the abolition of Canada’s marijuana laws. So I called him up and scheduled an appointment. Emery had a little shop in Gas Town (a trendy, gentrified neighborhood in downtown Vancouver). Twenty years ago selling merchandise linked to marijuana and hash was far more provocative than it is now, and the police were keeping a close eye on Emery. He has since gone on to lead a very public life as an activist. You can read more about him at his substantial Wikipedia article.

Here is the question. There are many practices that may not be physiologically good for the body including the drinking of a Coke or a beer, the eating of cheesecake or Doritos, the smoking of a pipe or a cigar. And yet, in moderation we consider these socially acceptable behaviors. What is more, in the interests of developing relationships with others, we might even partake in the ingestion of substances that we would usually avoid. If my new friend offers me a Coke, for example, I’ll accept it as a matter of social propriety, even though I regularly avoid soft drinks.

If that is the case, what about the recreational use of marijuana? Imagine you’re in a jurisdiction where the use of marijuana is legal and your new friend offers you a joint instead of a Coke. Would you accept or decline? And if the latter, would your declination be based on a moral issue in a way that refusal of the Coke is not?

In short, would Jesus smoke a doobie? 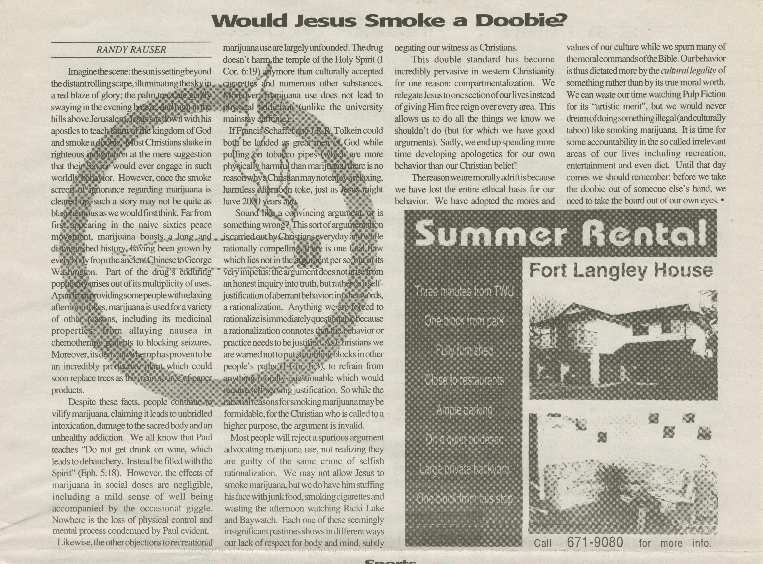