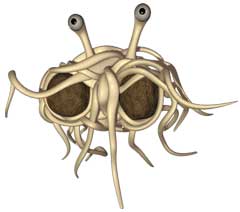 The FSM in the Flesh … or is it in the Semolina? (Image from the FSM website: Veganza.org)

The other day my daughter reported that three boys in her junior high class came to school wearing colanders on their head and smugly declaring themselves devotees of the Flying Spaghetti Monster. I’ve been following Bobby Henderson’s satirical new religion for the better part of the last decade (it was launched in 2005) and I’ve been surprised with the way the skeptic and atheist communities across North America have adopted it.

(Perhaps I shouldn’t be so surprised: Henderson’s best-selling 2005 book The Gospel of the Flying Spaghetti Monster is an engaging and cleverly written satirical critique of intelligent design theory (the narrow target) and religious doctrine and practice (the broad target).)

Clever though Henderson’s satire may be, typically those who want to join the fun by counting themselves “Pastafarians” are oblivious to the origins of the FSM in the debates over intelligent design theory. Even worse, they are equally oblivious to the way a clever satire can devolve into ignorant caricature of complex and nuanced traditions.

As for those three junior high neophytes of the new religion, alas, they were forced to remove their colanders in third period by an indignant teacher. Time to call the civil rights attorney!