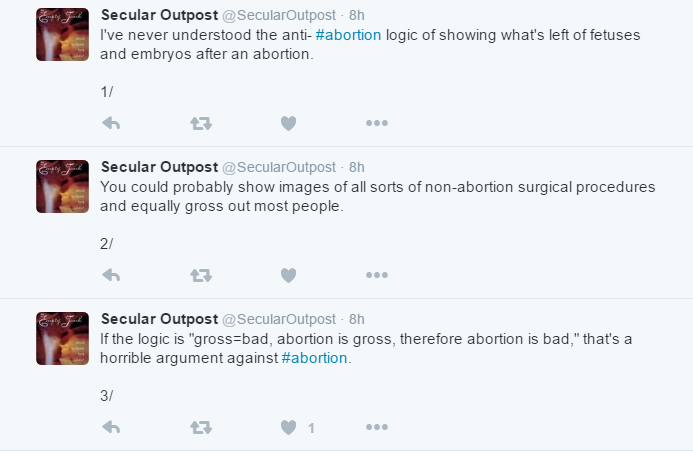 Now first off, I have my own concerns about the way the Prolife cause has often employed depictions of aborted fetuses for the sake of their cause. So my point here is not to defend the practice. Nor for that matter is my point to censure the practice. Rather, my point is to explain the logic behind it. And the logic most certainly is not “gross=bad, abortion is gross, therefore abortion is bad.”

So what is the logic?

Simple, it is an appeal to moral intuitions based on a fuller understanding of what abortion consists of.

Over the years it has been common practice within the Prochoice community to objectify the fetus through the use of dispassionate, technical descriptions of abortion procedures. And thus, for example, you will find reference to a vacuum aspiration abortion as the “removal of uterine tissue” or the “evacuation of uterine contents”. Of course, in one sense such language is technically correct and can be appropriate. But it is also important to note what is not said when the procedure involves using a high power suction device to rip a developing human being in utero into pieces which can then be removed and disposed of. The reality is that sometimes a picture is worth a thousand words.

In search of a fitting analogue, I think here of the lynching of Emmett Till in 1955. As I proceed with this comparison, please keep in mind that the sole point of the analogy is that in both cases one employs a graphic visual depiction of the aftermath of an action as an appeal to moral intuitions so as to shape public opinion and motivate the public to moral action.

Emmett was infamously mutilated and then killed for nothing more than whistling at a white woman. His mother, Mamie Till Mobley, insisted that her son’s casket remain open during the funeral so that “all the world can see what they did to my boy.” Till’s mother recognized how important the visual impact of the aftermath of a lynching could be in galvanizing public opinion against the evils of systemic racism. Needless to say, her logic most certainly was not “gross=bad, lynching is gross, therefore lynching is bad.”