Over the years I’ve preached my sermon on the imprecatory psalms on several occasions. Not surprisingly, when you return to an issue on multiple occasions, your position is liable to develop in particular ways. And so it is here. Initially my assessment followed that of C.S. Lewis: the imprecatory psalms represent a wicked desire for the destruction of one’s enemies which is critiqued by the model of Christ who shows us the need to love our enemies.

As I have reflected further on this issue, my position has taken on a crucial nuance. While I still retain the view that the curse of the imprecatory psalmist is not the place to stay, I am now reluctant to call those curses “wicked”. The reason? I paused to reflect on the depth of anger, rage, frustration, and hopelessness that would characterize the anguished souls who pray these prayers. 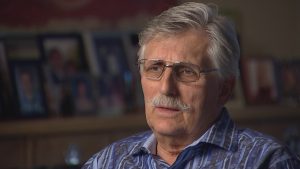 Fred Goldman, bereaved father and prayer of the imprecatory psalms

Since I just watched the outstanding long-form documentary O.J.: Made in America, Fred Goldman is in the top of my thoughts: a grieving father bereaved of his son by a psychopathic media darling who was acquitted of murder. What prayers would Fred Goldman pray knowing that “The Juice” had killed his son and gotten away with it? Can I begin to grasp the anger and rage of Mr. Goldman? I cannot. And consequently, I am reluctant to denounce any curses he may be inclined to call down on “The Killer”.

At the same time, I also find myself persuaded that anger and rage cannot be the last word. As reasonable and justified as our indignation at this kind of outrage may be, to retain this degree of hatred is nothing short of soul-destroying. And so, I find that the imprecatory psalms, when read within a broader canonical context, beckon us from an honest and open expression of our anger and rage to a point where we can move beyond it to forgiveness and reconciliation. I am not saying that this end goal need occur in this lifetime — in many cases I suspect it does not — but nonetheless I do believe it should remain the end goal.

And that brings me to the most recent example of my imprecatory psalms sermon which I preached at Daylight Church in Louisville, KY on June 5, 2016. In this version I pull back from simply denouncing imprecations as wicked (as does Lewis). Instead, I ruminate for a time on the types of offenses which would prompt one to pray those curses in the first place. So while I remain convicted that we must ultimately move beyond our rage and anger at our offenders, far be it from me to say when that point would be.