Here’s another article I wrote for the TWU Today Newspaper from the nineties. This article was published in October 1995 and describes my mixed experience at a charismatic conference in Kelowna, BC featuring John Arnott of the Toronto Airport Vineyard (later Toronto Airport Christian Fellowship). Back in the mid nineties the Toronto Airport Vineyard was attracting visitors from around the world with the promise of a powerful experience of the Spirit. The most common phenomenon from Toronto was uncontrollable laughter, though attendees exhibited many other phenomena as well including barking, screaming, and the traditional being slain in the Spirit. Harder to come by were a deepened intellectual understanding of God or a renewed and expanded sense of mission and social justice.

I attended the conference in Kelowna as part of a paper I was writing for a course I was taking on Charismatic Christianity. While I grew up in the Pentecostal church and thus had significant first hand exposure to charismatic phenomena, I was frankly appalled by the conduct of those at the conference. This account gives my somewhat diplomatic report of the experience. 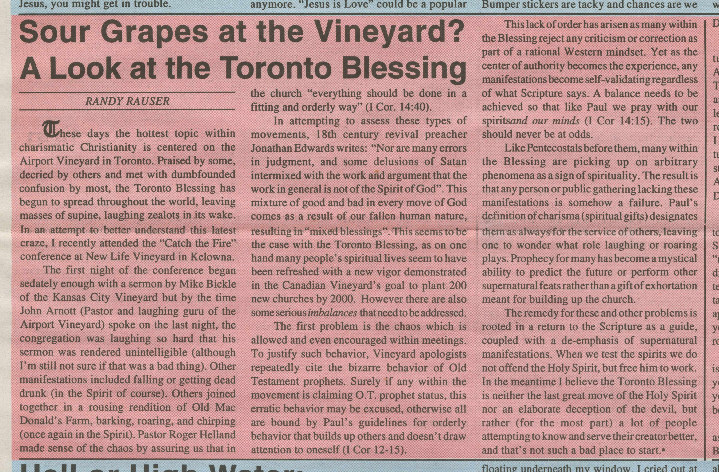