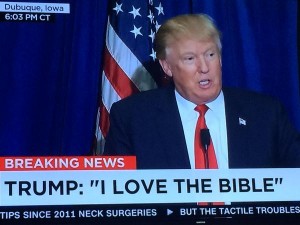 If you’re following the American race for the White House, you might be excused for mistaking the candidates for itinerant preachers. And I’m not just talking about Mike Huckabee. Even Donald Trump has taken to waving a Bible as he publicly mulls over the profundity of Two Corinthians.

This kind of behavior has led to many commentators lamenting the extent to which Christian (and nominally Christian) candidates are acting Christian on the campaign trail. In an interesting New York Times article published just yesterday, “Sick and Tired of ‘God Bless America’,” Susan Jacoby critiques this pandering to religion. She points out that according to the Pew Research Center, those who do not belong to any religious group (i.e. the “nones”) has swelled from 21 million in 2008 to 36 million today. To be sure, many nones would count themselves “spiritual” and some would believe in God, but they are all tacitly excluded by the candidates’ perpetual waving of their Christian credentials.

My main quibble with the article is that it focuses on the exclusion of the nones. But how many Buddhists perceive themselves to be included by candidates who consistently stump in Christianese? What about Hindus? Sikhs? (To say nothing of Muslims!)

Not only is the focus exclusive, but Jacoby points out that it also arbitrarily limits concerns for religious freedom to those of an avowed religious belief:

Freedom of conscience for all — which exists only in secular democracies — should be at the top of the list of shared concerns. Candidates who rightly denounce the persecution of Christians by radical Islamists should be ashamed of themselves for not expressing equal indignation at the persecution of freethinkers and atheists, as well as dissenting Muslims and small religious sects, not only by terrorists but also by theocracies like Saudi Arabia. With liberal religious allies, it would be easier for secularists to hold candidates to account when they talk as if freedom of conscience is a human right only for the religious.

I agree with Jacoby that Christian (and nominally Christian) candidates should stop exploiting their Christian faith on the campaign trail. But that doesn’t mean they should stop being Christian. Indeed, in my view the exclusivist appeals to Christian faith that have become the norm are not Christian enough. Lest I be misunderstood, I’m not suggesting these candidates need to avail themselves of more appeals to religion. Rather, they need to acquaint themselves with the oft neglected Christian virtue of hospitality.

In her book Making Room: Recovering Hospitality as a Christian Tradition (Grand Rapids: Eerdmans, 1999) Christine Pohl offers an incisive challenge to Christians to rediscover the virtue of hospitality which is so central to the Christian tradition. Her analysis is particularly incisive in chapter four, “Hospitality, Dignity, and the Power of Recognition.” Pohl writes:

“Although we often think of hospitality as a tame and pleasant practice, Christian hospitality has always had a subversive, countercultural dimension.” (61)

“Because the practice of hospitality is so significant in establishing and reinforcing social relationships and moral bonds, we notice its more subversive character only when socially undervalued persons are welcomed. In contrast to a more tame hospitality that welcomes persons already well situated in a community, hospitality that welcomes ‘the least’ and recognizes their equal value can be an act of resistance and defiance, a challenge to the values and expectations of the larger community.

“People view hospitality as quaint and tame partly because they do not understand the power of recognition.” (62)

Pohl goes on to refer to the welcome of “inconvenient strangers” (64) as part of the call of every Christian. And that certainly includes the 36 million inconvenient strangers who hold no faith and find themselves excluded by presidential candidates who include appeals to “God”, “church”, “faith” or “religion” in every second sentence.

Imagine the power of recognition that would come with a Christian presidential candidate setting aside exclusivist pandering to a religious interest group and instead campaigning in a way that includes all ethnic, cultural, religious, and non-religious groups. That certainly would be subversive, countercultural … and Christian.