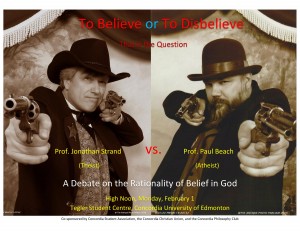 The existence of God is one of the perennial questions of philosophical inquiry. Indeed, in the minds of many, it is the very greatest question one can ask.

But not everyone agrees. While the existence of God may have long occupied the spotlight, the critics believe that that time is past. The time has now come to leave belief in God behind and to join the rational, scientifically literate, secular denizens of the 21st century. Belief in God, says the critic, is no longer a rational option for the thinking person.

So how is this disagreement ever going to be settled?

This is that conversation.