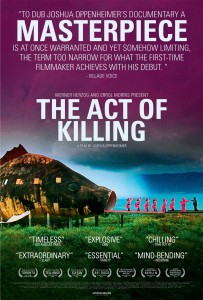 Pull the annals of the twentieth century off the shelf and you will find them dripping with the blood of countless victims of genocide. While Steven Pinker may be right that world history is progressively becoming less violent and more civil, that is little comfort to the victims of Hitler’s concentration camps, Cambodia’s killing fields, or Rwanda’s blood-spattered rolling hills.

Add to that bloody count the half million souls butchered in Indonesia during the purging of alleged communists in 1965-66. (It’s a sorry fact that when one speaks of the genocide of Indonesia, the immediate follow-up question is, which one?)

In the wake of WW2 Nazi genocidaires fled Germany like cockroaches scurrying away from the light of an opening door. But in The Act of Killing we meet the perpetrators of Indonesia’s 1965-66 genocide proud of their crimes and anxious to receive further recognition for them. And directors Joshua Oppenheimer, Christine Cynn, and their anonymous Indonesian co-director, are anxious to oblige. They invite the genocidaires to act out their crimes as the cameras roll, apparently appealing to the basest of human instincts that are willing to pursue one’s fifteen minutes of fame even for the most inhumane of deeds.

The ensuing interviews are chock full of helpful tidbits. For example, you choke people with wire because the wire cuts into their flesh and speeds the killing with a minimum of unnecessary blood spatter. Add in jocular laughter and incessant mugging for the camera and throngs of average citizenry smiling in the background and, well, you get the picture.

The Act of Killing is an important film, but it sure as hell is not pleasant viewing. Viewers will likely experience a range of emotional responses from outrage to hatred to utter disbelief to resignation. So why watch it? Because these things happened, because people like that are in the world, and because — but for the circumstances of history — we could find ourselves the victim, the perpetrator, or one of the smiling crowd.