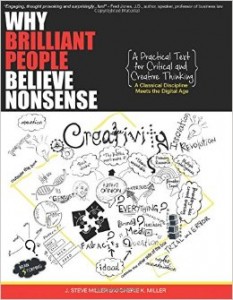 There may be no skill more basic to human flourishing than the ability to reason well. It’s a skill that encompasses knowledge, wisdom, self-awareness, and emotional intelligence. And it seems to be in perilously short supply in our world that is so often dominated by sharp binary oppositions, brash personalities, quick conclusions, and “debate” that rarely moves deeper than bumper sticker sloganeering.

So what does it mean to reason well? In our day many people seek guidance from the so-called “skeptic” movement as found in books like Michael Shermer’s Why People Believe Weird Things: Pseudoscience, Superstition, and Other Confusions of Our Time (Henry Holt, 1997, 2002). While Shermer does offer a lot of good advice on critically evaluating fringe positions ranging from alien abductions to Holocaust denial, he never turns the skeptical eye onto his own beliefs. Indeed, he adopts the crude binary opposition of the uncritical fundamentalist as he distinguishes “spiritualists, religionists, New Agers, and psychics” from “materialists, atheists, scientists, and skeptics” and opines confidently that only the latter truly care about truth (7). Sadly, like so many so-called “skeptics”, Shermer never pauses to apply his skills of critical thinking to his own crude binary oppositions and the core secular dogmatisms that they protect.

A real guide to good reasoning

Steve Miller and Cherie Miller’s new book Why Brilliant People Believe Nonsense transcends such crude binary oppositions as it offers a guide to critical thinking that has a self-awareness and situatedness that is simply absent in the lesser works of so-called skeptics like Shermer. This is a holistic manual that offers a genuine guide for critical thinking in our day. The Millers are Christians and so it shouldn’t surprise you that the book is not hostile to Christianity in a way that Shermer’s book is. Indeed, they devote chapters to illumining the bad reasoning of atheists like Richard Dawkins (chapter 10 on weak and invalid arguments) and Bertrand Russell (chapter 25 on emotional intelligence). Moreover, they occasionally make points that are supportive of a Christian worldview,

But the Millers strive to be fair in their treatment of topics. For example, on page 71 they illustrate how preference can affect reasoning. To make their point they note that William Lane Craig hoped that God does exist while Thomas Nagel hoped that he doesn’t. The lesson is that Christian reasoning (like that of Craig) is as open to influence by desire as that of the atheist. No group is exempt from critical analysis Throughout the book the Millers make an effort to be fair to all sides so as to ensure that no set of beliefs is being protected from critical introspection. For example, they critique Christians who are committed to traditional hymnody (77, 81).

Example: “You either support Israelis in Palestine or you’re an anti-Semite.”

Example: “Are you for George Bush or are you for the terrorists?” (161)

The result is that a person could read Why Brilliant People Believe Nonsense and not know what the Millers’ own religious or political views are. And this is as it should be, because it indicates that no views have been exempted from critical introspection.

These eight sections are divided into 25 chapters and together they cover a dizzying range of topics. Steve Miller (the voice in the book) punctuates the analysis with an endless number of illustrations, many of them richly drawn from biographies of well known people like Warren Buffet, Bertrand Russell, Steve Jobs, and Benjamin Franklin. And Led Zeppelin, Martin Luther, Ozzy Osbourne, and The Beatles. And countless others besides. Miller is extremely well read and is uniquely equipped to garner wisdom from a wide number of disparate sources in business, theology, history, politics, culture, and psychology, all to the end of equipping the reader to reason well.

Perhaps I can provide one example of the incisive analysis in the book. To that end, consider how the Millers follow up a relatively conventional chapter on logical fallacies (chapter 11) with chapter 12 that addresses what Steve Miller calls “The Fallacy Fallacy”. The concern of this chapter is to warn against the temptation of the “internet troll” who has a superficial grasp of fallacies that is only sufficient to label others with a smarmy self-satisfaction. This is how he puts it:

“I often read comments on blog posts or articles or Facebook discussions which accuse the writer of committing a specific logical fallacy and thus declaring the argument thoroughly debunked, typically with an air of arrogant finality. While the debunker may feel quite smug, intelligent participants consider him quite sophomoric. In reality, he’s typically failed to even remotely understand the argument, much less apply the fallacy in a way that’s relevant to the discussion.

“Surely this fallacy deserves a proper name and should be listed with other fallacies. Thus I’ll define ‘The Fallacy Fallacy’ as ‘Improperly connecting a fallacy with an argument, so that the argument is errantly presumed to be debunked.'” (172)

This is a brilliantly perceptive observation, one which is made not from the ivory tower but rather from the muddy trenches of real world exchanges in the blogosphere. And I heartily concur with Miller that the “Fallacy Fallacy” is distressingly common. (In my experience, the argumentum ad populum and ad hominem are the fallacies most frequently invoked under fallacious pretenses.)

So what of it?

Why Brilliant People Believe Nonsense is full of trenchant analysis like this. For example, chapter 20 begins by recounting the biography of a ne’er do well named “Bartle Niesient” who seems to be lazy and obtuse. Then we learn that this person is in fact Albert Einstein. It turns out that the lazy and obtuse ne’er do well is, in fact, one of history’s great geniuses. What’s the lesson here? Miller observes that we tend to define “smart” and “genius” across a spectrum of abilities and aptitudes. But Einstein was woefully limited in certain areas, as are most geniuses. The lesson is that we ought to define “smart” and “genius” with respect to particular areas rather than generally. (In other words, if Einstein doesn’t quality as a genius relative to the traditional definition, then so much the worse for the traditional definition.) And this in turn should revolutionize the way we think about education itself. (See the discussion in chapter 20.) This is a fascinating chapter brimming with wisdom and insight.

The same might be said of the book generally. Why Brilliant People Believe Nonsense is a tour-de-force comprised of eight sections, twenty-five chapters, eight (count ’em, eight) appendices, and 400+pages, all directed to the end of inculcating in the reader the ability to reason well. In this compulsively readable work Steve Miller and Cherie Miller offer an invaluable tour of critical thinking and life wisdom. Countless fascinating anecdotes keep the reader turning the pages, and every story has a lesson to teach, an insight to bestow. Why Brilliant People Believe Nonsense is an ideal handbook for good reasoning and wise living in the twenty-first century.

Order your copy of Why Intelligent People Believe Nonsense here.

Thanks to Steve Miller for a review copy of this book.