It’s been about a week since Wheaton College political science professor Larycia Hawkins was launched into the spotlight after she was suspended by Wheaton College, in part because she declared:

“I stand in religious solidarity with Muslims because they, like me, a Christian, are people of the book. And as Pope Francis stated last week, we worship the same God.”

As a result, Christians have been lining up to debate the question: “Do Christians and Muslims worship the same God?” Frankly, I wish they would begin with another question: “What does it mean to say two people are worshipping the same God?” In fact, it seems to me that folks are assuming a lot when they ask the question, and perhaps some of those assumptions need to be examined more closely.

My own two cent contribution to this debate will consist of a thought experiment based on the lives of two people who lived in Rwanda during the 1994 genocide: Christian pastor Elizaphan Ntakirutimana and Muslim UN soldier Mbaye Diagne.

Before we consider their cases I will set the context by saying a few words about the genocide itself.

The 1994 Rwandan genocide represents the most efficient genocide in the twentieth century, and virtually all of it was carried out with roving militias brandishing primitive farm implements like scythes and machetes. Over a three month period more than 800,000 Tutsis and moderate Hutus were butchered while the international community stood by. The demonically bureaucratic calculus of geopolitics that drove Western complacency was soberly summarized by one US official who brazenly declared that “one American casualty is worth about 85,000 Rwandan dead.” (Cited in Samantha Powers, A Problem from Hell, 381). With no economic interest in the region, western powers were loathe to become involved in the unfolding horrors of this middling African nation.

But if we really want to appreciate the horror of this genocide, we need to move from the abstract realm of statistics to the ground zero of blood, soil, and the groans of the dying. In one case, the executive assistant of Romeo Dallaire (commander of UN forces) arrived too late to save Tutsis hiding in a church run by Polish missionaries. He recalled the anguished scene as follows: ”

When we arrived, I looked at the school across the street, and there were children, I don’t know how many, forty, sixty, eighty children stacked up outside who had all been chopped up with machetes.” (Cited in Powers, A Problem from Hell, 349.)

As unimaginable as that horror is, it is but a proverbial drop of blood in the roiling cascade of close to one million lives cut down.

The Christian and genocide

So how did our Christian and Muslim respond? Let’s begin with the Christian pastor.

Elizaphan Ntakirutimana was a leader in the Seventh Day Adventist Church with impeccable theological and pastoral credentials. In the middle of the genocide, several Tutsi Adventist pastors wrote Ntakirutimana a letter appealing for help that opened with the haunting line: “We wish to inform you that tomorrow we will be killed with our families.” (See Philip Gourevitch’s book of the same title.) With painful understatement and extraordinary diginity, these pastors were begging for help and aid from a fellow Christian. So how did Ntakirutimana respond?

Instead of providing assistance to the Tutsis, Ntakirutimana directed Hutu militias to the Mugonero complex where they were hiding, resulting in a grisly slaughter. Think about that: in the cruelest irony the Christian these saints appealed to for salvation instead became their chief executioner. Although Ntakirutimana managed to avoid prosecution for several years, in 2003 he was finally convicted of the crime of genocide by the International Criminal Tribunal for Rwanda. 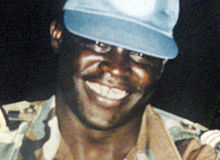 The Muslim and genocide

At the same time that a number of church leaders like Ntakirutimana either stood by or actively joined the genocide, a few brave souls struggled to save what lives they could. One of those was Mbaye Diagne, a captain from the Senegalese army—and a devout Muslim. Working for UN forces, Diagne repeatedly flouted the orders of his commanding officer to remain within the compound. Instead he ventured out time and again to pick up Tutsis in his Jeep—about five at a time—and transfer them to the relative safety of the compound.

In order to accomplish this extraordinarily brave and selfless feat, Diagne repeatedly bargained his way across dozens of Hutu checkpoints, using little more than cigarettes and his good humor. In this way, he worked tirelessly for several weeks, repeatedly putting his life at risk and saving dozens of lives … until he was finally killed on May 31 from flying shrapnel.

Now imagine that you have the choice to go before the throne of God on judgment day clothed either in the life and legacy of Elizaphan Ntakirutimana or that of Mbaye Diagne. Which would you choose?

This article is based on my book You’re Not as Crazy as I Think: Dialogue in a World of Loud Voices and Hardened Opinions (Biblica, 2011).