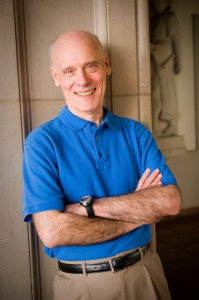 Dr. Hugh Ross, President and Founder of “Reasons to Believe”

Science fiction writer Arthur C. Clarke famously proposed three so-called laws that memorably capture the wonder of scientific advance. According to the third law, “Any sufficiently advanced technology is indistinguishable from magic.” If that’s true, science has made the world a truly magical place.

And it is true. Just think how an iPhone would appear to a medieval peasant. Music? Photographs? Videos? And the voice of loved ones from far away speaking? Magic indeed. Now try to imagine how the technology a thousand years hence will look to us today.

But if science has brought magic into the world, many people believe it has done so at the significant cost of removing an even deeper magic, that of souls, spirit beings, and above all, God. In short, the world has been disenchanted. The sea of faith and wonder once lapped at our shores. But now, as Matthew Arnold famously observed, we only hear its melancholy, long, withdrawing roar.

Well, so goes the popular narrative anyway. But what if it isn’t so? What if the advance of science, far from eclipsing God and disenchanting the world, is laying bear the existence and intentions of the creator himself?

That’s the perspective of Dr. Hugh Ross, founder of one of the most respected apologetics organizations in the world today, Reasons to Believe. Dr. Ross is a popular speaker and the author of many books including Why the Universe is the Way It Is (Baker, 2010), Navigating Genesis: A Scientist’s Journey Through Genesis 1-11 (RTB Press, 2014) and More than a Theory: Revealing a Testable Model for Creation (Baker, 2009).

In this episode of The Tentative Apologist Podcast we sit down with Dr. Ross for a wide ranging conversation on God, science, and reasons to believe.