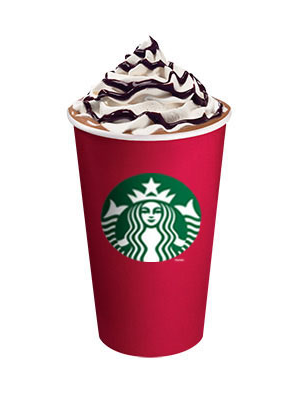 These days I rarely go to Starbucks. But I can’t help commenting on the latest installment in the interminable and patently ridiculous “war on Christmas”. I speak, as you can probably guess, of the “controversy” that has arisen over Starbucks’ decision to serve its coffee in plain red cups this holiday season. Personally, I haven’t met any Christian who is offended by Starbucks’ decision but I know they must be out there because the debate apparently exists.

Think about it. Had Starbucks added a motif of falling snowflakes or mistletoe, the protesters would have been silent. After all, they’re not demanding a crèche on the cup. (If anything, that would be even more absurd.) They just want to see some sort of holiday motif, and a snowflake or mistletoe pattern would suffice.

Think about that: some Christians are protesting Starbucks’ decision not to emblazon snowflakes or mistletoe on their cups. Yes, it is that ridiculous.

That’s not to say there isn’t a scandal with Starbucks and their coffee cups. Indeed, there is.

Recently, the Canadian investigative journalism program Marketplace investigated Starbucks’ claims to recycle their disposable cups. It turns out those claims are garbage. Moreover, Starbucks knew that their cups were not being recycled. In short, they deceived the public.

Starbucks pretended they were green, but they lied. And that leaves me seeing red.