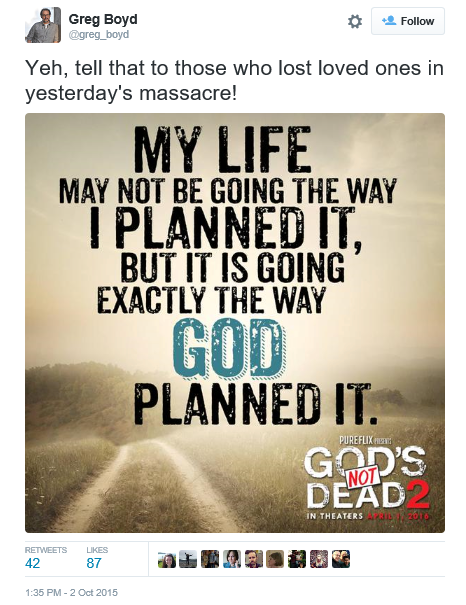 The other day I came across this tweet by Greg Boyd (courtesy of a Justin Brierley retweet). The tweet consists of an advertising graphic for the upcoming film God’s Not Dead 2 accompanied with Boyd’s wry twittery.

What’s “twittery”, you ask? I coined the term to refer to the following:

twittery. n. “pithy statements which make up in sheer tweetability what they lack in nuance and charity.”

Twittery can be fun, kind of like “shootin’ the bull” with your friends. But it has a high cost, for twittery consists of cheap shots at the beliefs and/or practices of others. (Remember when your mom warned you: “Don’t build yourself up by tearing others down.” Twittery would be indicted under your mom’s advice.)

But before we get to Boyd’s twittery, let me be clear on the object of his critique. The proximate target may be God’s Not Dead 2. But the film’s status as proximate target is incidental and so we can set it aside.

“My life may not be going the way I planned it, but it is going exactly the way God planned it.”

As an open theist, Boyd is no friend of meticulous providence. And he uses this tweet to state his rejection of the doctrine. The occasion is presumably the mass shooting at Umpqua Community College which had occurred a day before he posted his tweet. And so, Boyd responds to the claim that one’s life is going as God planned it with the quip:

“Yeh, tell that to those who lost loved ones in yesterday’s massacre.”

So why do I consider this tweet an instance of twittery? It certainly is pithy. But what about lacking charity and nuance?

Well, let’s think about this. We can all agree that it would be wrong to tell a person who had just suffered a tragic loss that this was part of God’s meticulous providence. But here’s the big question: does it follow that the inappropriateness of this response calls meticulous providence into question? Boyd appears to think so.

But that seems to me clearly false. On the contrary, all that follows is that we must share with others that which we believe to be true with pastoral sensitivity (or, if you prefer, emotional intelligence).

Imagine, for example, that your best friend’s son gets in a car accident. Because he is not wearing his seatbelt, the young man flies through the windshield and into oncoming traffic where he is killed. When you arrive at the hospital to comfort your grieving friend, would it be appropriate to say “Seatbelts save lives”? (Um, no.) Would it follow that one ought to question the maxim that seatbelts save lives? (Um, no.)

Now let’s consider for a moment Boyd’s own theology of providence. On Boyd’s open theist view, God may not know the future actions of libertarian free creatures, but God nonetheless anticipates the intentions of would-be mass murderers as they plan and gradually carry out their massacres. And yet, God chooses not to intervene to prevent those atrocities.

Thus, on Boyd’s view of providence, God observed Chris Harper-Mercer planning and carrying out the horrible massacre on that dark day. As the seconds ticked by, God could have prevented Harper-Mercer from acting at any point. For example, God could have tripped Harper-Mercer in the parking lot of the college, leaving him to suffer a concussion and be discovered by campus security officers. Surely the God who brought the universe into existence could have achieved this outcome without even lifting the proverbial pinky. But God chose not to act. Instead, he stood by, observing the unfolding carnage.

Yeah, try telling that to those who lost loved ones in the massacre.