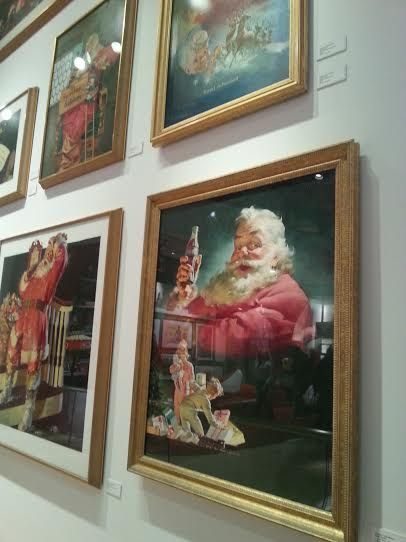 Paintings by Haddon Sundblom at the “World of Coca Cola” gallery.

The other day I visited the “World of Coca Cola” museum in Atlanta, GA which (as you can probably guess!) is devoted to the perennially popular beverage and its incalculable impact on popular culture.

The museum includes a gallery featuring the iconic paintings of Haddon Sundblom. Beginning in the 1930s, Sundblom created a series of Christmas images featuring the jolly old elf promoting Coke. Sundblom’s images helped cement the modern conception of Santa Claus as that “jolly old elf” of Clement Moore’s famous poem “A Visit from St. Nicholas”. (However, by the time Sundblom painted, Santa had grown substantially from a diminutive elf to a gargantuan man with an appetite for endless milk, cookies … and Coke.)

As a fan of Santa Claus, I was deflated to see Catholic apologist Matt Fradd’s article “Why I Don’t Lie to my Children About Santa Claus.” Fradd gives three reasons why parents shouldn’t “deceive” their children into believing in St. Nicholas. The core of Fradd’s argument is that telling your children about Santa Claus “constitutes lying, that lying is wrong, and that we therefore should’t do it.”

I disagree with this argument. In response, I will give a scenario that should follow equally under Fradd’s indictment against lying. However, I don’t think this scenario is morally problematic. And that provides a good reason to believe the instance of inculcating Santa Claus belief is also not morally problematic.

So here’s the scenario. Mr. Smith returns from a business trip and is met at the airport by his wife and daughter. Five-year-old Jenny runs to meet her father and asks the predictable question: “Whatcha bring me?!”

Mr. Smith smiles, reaches into his shoulder bag, and pulls out a teddy bear. “This is Teddy,” Mr. Smith says. “He’s kind of nervous around new people though.” Teddy sneaks a peak at Jenny and then quickly looks away. Jenny giggles. And over the next several minutes, Teddy and Jenny are gradually introduced. Along the way, Mr. Smith fills in Teddy’s complicated backstory and how he is delighted finally to have a new and lasting home with Jenny.

Is Jenny just pretending, or does she really believe Teddy is an agent with a complicated backstory and shyness around new people? Jenny’s own behavior seems to provide an answer. A few days after meeting Teddy, Jenny mistakenly leaves him at a friend’s house. She only realizes her mistake after they get home. “Mummy, we need to get Teddy!” she wails. “Don’t worry honey,” her mom replies. “I’ll ask Mrs. Jones to bring him to church tomorrow.” “Noooo!” Jenny wails. “We need to get him now. He doesn’t know anybody there! He’ll be scared!”

Clearly, Jenny is not simply pretending. She really does accept this backstory in some sense. And that brings us back to her father, Mr. Smith. Did he lie to Jenny? Should he instead have said the truth? “Jenny, I purchased this plush toy at the airport. Be sure you do not impute agency to it as it is merely an inert object!”