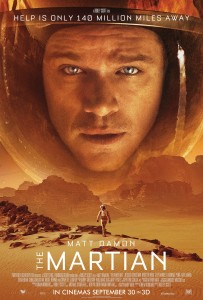 A couple weeks ago I saw The Martian and I’m telling you, it’s out of this world.

(Yes, it’s true. I began a serious review with a pun that Henny Youngman wouldn’t deign to use.)

But don’t let that awful opening line throw you. I loved this movie. It’s got all the right elements of a top shelf blockbuster: Great actors like Matt Damon, Jeff Daniels (from Dumb and Dumber to the head of NASA!) and Jessica Chastain; an outstanding director (I’m looking at you Ridley Scott); a bestselling book; a dramatic otherworldly scape; and best of all, it’s the kind of story that could be based on real events. More accurately, in twenty years it could be based on real events. And that fact alone is sufficient to hold my wonder. 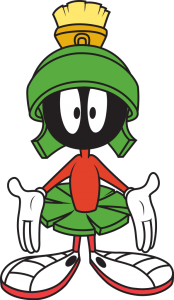 When I told my mom we had gone to see The Martian she asked, “Is that a cartoon?” I’m guessing she was thinking of Marvin the Martian from Warner Bros. fame. I answered: “Uh, no.”

But it got me thinking of how our understanding of the red planet has been transformed in the 60+ years since Marvin the Martian first made his appearance. The Mars of the mid-twentieth century was a mysterious world that potentially harbored an advanced civilization the signature of which could be seen in those distinctive canals. The final nail in the coffin of that fanciful idea only came in the 1960s with the Mariner 4 mission.

But the ensuing story, if not as fanciful as the vision of Warner Bros., is no less astounding. Ridley Scott’s vision of the surface of the red planet may have no Marvin the Martian with his Romanesque helmet, floppy feet, and ray gun, but it is a gorgeous, severe, otherworldly landscape. And The Martian reminds us that we could be there in less time than it takes a newborn to move from diapers to the university dorm.

You probably know the story. An unexpectedly severe storm forces a team of astronauts to evacuate, leaving behind a single member of the team, Mark Watney (Damon). The team assumes Watney is dead, but it turns out he is very much alive. Simultaneously a stud and a scientist, Watney checks all the boxes on an eHarmony application.

Watney’s chiseled good looks may be eye candy for a subsection of the audience, but it is his scientific prowess that will get him off the red rock and back home. As he puts it in the most quotable line of the whole film:

“In the face of overwhelming odds, I’m left with only one option, I’m gonna have to science the shit out of this.”

First up, Mark needs water. As he observes,

“If I want water, I’ll have to make it from scratch. Fortunately, I know the recipe: Take hydrogen. Add oxygen. Burn.”

Next, grow something he can eat. Mark starts with Martian dirt, potatoes, and his own poop as he boldly declares:

“Mars will come to fear my botany powers.”

That declaration would be sufficient to garner the attention of S.H.I.E.L.D. in the Marvel universe. “Botany powers? Tell us more!”

The truth is that Mark’s powers are simply the powers of a geek scientist who understands natural laws.

And that brings us to an important theme of the film: science breeds power. If you want to understand the world, you’ve got to “science the shit out of” it.

Over the last several weeks, I have seen several atheists refer to The Martian favorably. It isn’t hard to see why. To begin with, the film elevates science as a tool to understand the world. After all, it is science that will get Mark back to earth.

What is more, religion has a supporting role, at best. There are only two appearances that religion makes in The Martian. In the first, Mark plunders the Mars base in search of flammable material to make water. The only thing he can find are the wooden crucifixes of a fellow astronaut. (At least they are shown to have some use, right?) In the second, one NASA member asks a second if he believes in God. When he says yes, the answer comes: “Good, we’ll need all the help we can get.” (paraphrase)

That’s it. At best, God serves as an adjunct to help NASA get Mark Watney and his fearless team safely back to earth. Traditionally conceived as the sovereign creator and sustainer of all, God is now a backup plan: In case of emergency, break the divine glass … and hope for the best.

With that kind of picture, I can see why atheists have liked this movie. It feeds into a popular narrative that religion — and more specifically, God — is little more than the pepper sprinkled on the substantive entrée prepared and cooked by scientific prowess.

So what is wrong with this picture?

To answer that question, let’s return to Mark’s bold claim that Mars will come to fear his botany powers. What’s that supposed to mean, exactly?

To put it bluntly, it means that Mark will eventually be able to grow enough potatoes on the surface of Mars to keep from starving. Not that I’m dissing that accomplishment: If Mark grows a potato on Mars, that’s one more potato than I would grow.

But botany provides only one step toward getting home.

If Mark wants to make it back to earth, he will need different levels of explanation, including physics, chemistry, meteorology, and so on. Any return to earth will be a team effort.

For all its brilliance, that’s the Achilles’ heel of The Martian. It plays to a reductive peanut gallery by focusing on the question of getting a hunk of meat from Mars back to earth. A far more interesting question is this: how do you get seven billion Homo sapiens to flourish in community?

To answer that question, we will require substantially more than botany — or indeed, science — can provide.