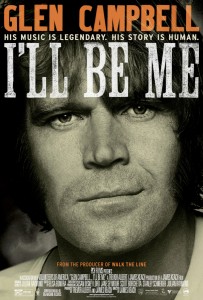 I’ve never been a fan of country music. But I’ve long been a fan of Glen Campbell, because he was one of those rare artists who transcended his genre. In his case that transcendence came with pop-infused songs and his inimitable, rich and soulful voice. There are certain artists that are so enduring, you might fall into the mistaken assumption that they’ll always be there. And Glen Campbell, with more than fifty million albums sold and a string of hits like “Wichita Lineman,” “Galveston,” and “Rhinestone Cowboy,” was in that category.

So it was something of a shock when I first heard in the summer of 2011 that Glen had been diagnosed with Alzheimer’s and would now be embarking on his final farewell tour. (I blogged about it here.) A tour devoted to saying goodbye to fans, friends, and an unparalleled career: what an incredibly poignant, sad, and difficult prospect.

That final tour spanned 137 dates in North America and Europe, finally ending on November 30, 2012. And film director James Keach was there chronicling it all for this powerful documentary. Released in 2014 and newly added to Netflix, I sat down yesterday to watch “I’ll Be Me”.

The band on the final tour includes three of Glen’s children playing in his backup band as well as his wife hovering protectively just off stage. That makes it a truly family affair, as when Glen performs “Dueling Banjos” on stage with his daughter Ashley. The scene is impressive both for the beauty of the father/daughter intimacy and the fact that a man who cannot find the washroom in his own home retains such a mastery of his craft whilst on stage.

As you might expect, there are also many lows, including the visits to the specialists who note an increase in cognitive decline. And then there is Glen’s growing disorientation on stage as his supporting band attempts to guide him through his increasingly erratic performances.

Along the way there are many heart-rending scenes, as when Glen’s daughter Ashley testifies to Congress about the ravages of Alzheimer’s while her father sits plaintively beside her.

The family finally decides that the concert at the Uptown Theatre in Napa, California will be Glen’s final date. Sadly, by this time his cognitive decline has progressed to such a point that he cannot understand this will be his final concert ever. Glen stumbles through this final set, glimpses of the brilliant entertainer slowly becoming enveloped in a fog of confusion.

Jesus said, “to whom much is given, of him much shall be required.” Glen Campbell was given much in terms of talent and opportunity. And while he struggled mid-career with divorces and drug and alcohol abuse, he remained the consummate entertainer. And now, buoyed by a deep Christian faith and an indomitable human spirit, he smiles and jokes even in the midst of loss and uncertainty, as he bravely faces the challenge of Alzheimer’s with the spirit of “Rhinestone Cowboy”:

And a smile can hide all the pain