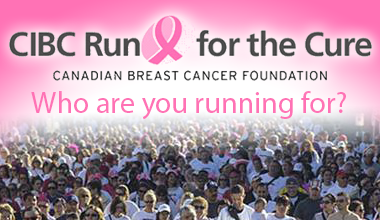 In his magisterial book The Emperor of All Maladies: A Biography of Cancer, Doctor Siddhartha Mukherjee tells the story of a dreaded disease, and the indomitable human spirit that has fought it throughout our history.

Cancer is a hydra-headed beast, and our struggles with it will only increase in the future. As the fight continues, it recruits countless doctors, researchers, and other professionals to fight in the war. And along the way, countless brave souls are conscripted to fight individuals battles. I lack the medical knowledge to offer a frontline contribution to the war, and by God’s grace I have yet to be conscripted to the battle, though my own mother has fought the battle … and won.

What I can do, however modest it may be, is contribute to the war using my modest means of fundraising. And so on this Sunday, October 4th, I will be Running for the Cure, a 10 km run focused on raising donations for the fight against breast cancer. In this capacity I will be running with my own daughter and her school team.

Five readers of my blog generously donated to my last fundraising run for Habitat for Humanity a couple weeks ago. I would ask the rest of you to consider offering your support as I run for the cure this Sunday. You can make a donation at the following address and I thank you for your support.