In “Christians standing against gay marriage need to be consistent on divorce” I pointed out the tension with Christians impugning gay marriage as unbiblical whilst ignoring Jesus’ teaching on divorce and remarriage. To put this problem in perspective, I want to start by saying something further about the problem of divorce.

In his book The Scandal of the Evangelical Conscience, p. 18, Ron Sider points out how serious the problem of divorce is within the evangelical community. Indeed, he suggests that divorce rates may be higher among evangelicals than in the general population. Here’s the passage: 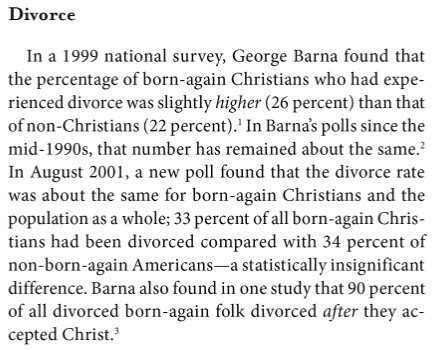 Divorce is bad enough, but as I noted in the aforementioned article, in Matthew 19:9 (cf. Matt. 5:32) Jesus teaches that divorce for any reason other than marital infidelity which is followed by remarriage results in a union which is adulterous.

I understand why Christians would rather talk about gay marriage than the ethical black hole of Christians who are divorced and remarried. But if one purports to uphold the Bible as an ethical guide in matters of marriage, one must apply the standards consistently.

I have heard one way that Christians have attempted to deal with the problem. They concede that remarriage in cases other than marital infidelity results in an adulterous union. However, they add, the moral ascription of adultery applies to the event of the divorced man and/or woman marrying rather than to the resulting state of affairs of that man and woman being married. In other words, the moment was adulterous, but the resulting marriage is not.

Presumably the point of this tortured argument is to shift the spotlight back off divorced and remarried Christians and onto gays. But the reasoning is completely spurious. If the original marital event was illegitimate then the resulting state of affairs does not constitute a legitimate marriage. And in that case, the resulting union involves two individuals in an ongoing state of adultery which is not different ethically from a married man and a married woman having an ongoing and unrepentant affair.

The scenario is also no different from a man who is already married who then marries again without divorcing his first wife. In retrospect, it makes no sense to say that the second marriage was illegitimate but the resulting state of affairs of being married is somehow legitimate. On the contrary, the event of the second marriage was an illegitimate farce and so, it turns out, is the resulting relationship between the bigamist husband and his second wife.

In like manner, Jesus considers the event of becoming married to result in an ongoing reality which persists even if one receives a certificate of divorce from a civil magistrate. In that case, the person who divorces and remarries is no different than a bigamist because mere humans have no right to dissolve that relationship that God has joined together. As a result, a remarriage after a divorce is ethically no different than bigamy (or adultery).

This means that according to the clear teaching of Jesus in Matthew 19:9 (and 5:32), people who divorce for any reason other than adultery and then remarry are adulterers and bigamists. And given the high rates of divorce among evangelicals, it follows that there are literally hundreds of thousands of Christians in ongoing unrepentant states of adultery.

Don’t skip over that fact. Mull over it. Let it sink in. Hundreds of thousands of Christians are in ongoing unrepentant states of adultery and all the while the church communities in their midst are saying nothing.

They’re saying nothing on divorced and remarried Christians, but they sure are saying a lot about gay marriage.

So here’s the fact of the matter. Christians who want to speak with some moral authority on the topic of gay marriage really ought to start by applying to themselves and their immediate belief communities the very biblical standards that they attempt to enforce on others. This isn’t rocket science. It’s ethical consistency 101.

Oh yeah, and I can anticipate some people retorting at this point something like this: “If you have to be perfect before you can offer a moral indictment then nobody can condemn anything because nobody is perfect.” But I didn’t say you’ve got to be perfect. I just suggested that blatant hypocrisy undermines moral witness. And it seems to me that the current widespread Christian focus on gay marriage at the very same time that this same Christian community ignores Jesus’ clear teaching on divorce is blatant hypocrisy.