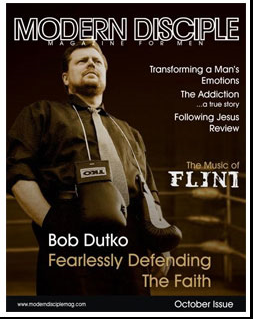 The other day I recorded an interview on atheism with Bob Dutko, a conservative Christian radio host in Detroit. This magazine cover thematically captures Bob’s style with the boxing gloves and his tagline, “Fearlessly defending the faith”. I’ve been on Bob’s show several times now beginning back in 2009 when my book Finding God in the Shack came out, and the exchanges are always interesting. This time out was no exception.

Unfortunately, we had a technical glitch midway through the interview and I got cut off. By the time I was on the line again only a few minutes were left. Paranoid that I might be cut off again, I kept all further answers relatively short and clipped. That’s the nature of radio.

To cap things off, my recording software cut off early so l lost the last minute of the interview.

The most interesting part of the interview came when Bob recalled a friendship he’d had with a past cohost in radio who was an outspoken atheist. Those are the sparks of recognition of the other that I’d like to fan into a flame.