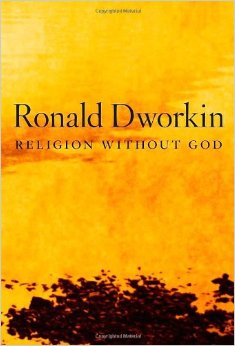 “The theme of this book is that religion is deeper than God. Religion is a deep, distinct, and comprehensive worldview: it holds that inherent, objective value permeates everything, that the universe and its creatures are awe-inspiring, that human life has purpose and the universe order.” (1)

So begins philosopher Ronald Dworkin’s boundary-busting, paradigm-shifting final work (Dworkin died in 2013). Religion without God is a breezy and provocative manifesto, based on Dworkin’s 2011 Einstein Lectures. It is also an important work of intellectual courage and true free thought which stands in marked contrast to the lockstep fidelity to naturalism and scientism that so oft characterizes self-described “free thinkers.”

The book consists of four chapters and I’m going to devote one installment of my review to each of those chapters.

Chapter 1, “Religious Atheism,” lays out the basic thesis. Both theists and atheists share a sense of intrinsic value and mystical wonder. Though Dworkin does not adopt the terminology, what he describes looks very much like the two classic transcendentals, the Good and the Beautiful.

The theist opts to explain these transcendentals in terms of a transcending mind, whilst the atheist appeals to resources closer at hand. But they can at least join hands across the aisle in recognizing the Good and the Beautiful.

God, says Dworkin, offers one way to structure this rich worldview. But it is not the only way. Those atheists who agree that the Good and Beautiful transcend the material world hold a “shared faith” with adherents to traditional revealed religion, and a recognition of this fact could “furnish a basis for improved communication between them” (2).

This brings us to the topic of religion. While many people have sought to define the concept with respect to belief in God, Dworkin takes inspiration from William James to offer a broader concept. Religion, he says, is “a sense of fundamentality” that the universe includes something(s) that “throw the last stone.” (4)

According to Dworkin, conventional western religions like Judaism, Christianity, and Islam make factual claims (what Dworkin calls “scientific” facts in the sense that they are non-normative descriptive claims of the way the world is) as well as value (or normative) claims about how one ought to live. Dworkin insists, however, that the attempts of various religions to link the two in the nature or will of the deity are unsuccessful: “Human life cannot have any kind of meaning or value just because a loving god exists.” (24-5) Consequently, Dworkin concludes:

“I agree that the existence of a personal god–a supernatural, all-powerful, omniscient, and loving being-is a very exotic kind of scientific fact. But it is still a scientific fact, and it still requires a pertinent background moral principle to have any impact on value judgments.” (27-28)

According to Dworkin, both the theistic and the atheistic religionist shares a common commitment — a common faith — in the existence of truths of value (i.e. the Good and Beautiful) that they cannot ground (29).

Next, Dworkin points out that the concept of God is itself disputed, or rather that the word “God” is applied to many distinct concepts, a fact that blurs the distinction between theist and atheist (31). Granted, the atheist will share little truck with the popular, anthropomorphized “Sistine God” (32). But concepts such as Tillich’s Ground of Being or Spinoza’s pantheistic conception are far more congruent with the religious atheist.

Religion without God is not a work of careful scholarship. Rather, as I noted above, it is a breezy manifesto. For that reason, it offers abundant opportunity for naturalists and theists to complain about the short shrift Dworkin gives to their nuanced perspectives.

To be sure, that is fair game. But I prefer to focus on the ecumenical side of Dworkin’s opening sketch. In a single chapter he argues that concepts like faith and religion need not separate the theist from the atheist. Rather, these oft polarized groups can indeed join hands across the aisle with a shared experience and wonder at the numinous qualities of existence. As Dworkin notes in the concluding section, even the concept of God itself need not be exclusionary, for various theological traditions offer different “divine” ways to conceive of and relate to the transcendent aspects of existence, and while a person might be an atheist relative to some of those constructions, they might well find common agreement in others.

There is one place where Dworkin fails to explore potential ecumenical overlap, and that is with respect to the concept of worship. He writes: “Religious atheists do not believe in a god and so reject the science of conventional religions and the godly commitments, like a duty of ritual worship, that are dependent on that part.” (24)

Dworkin’s certainly right that atheists do not accept a theistic conception of worship, but that doesn’t preclude an atheistic one. For example, the Greek word “proskuneo” which is translated as “worship” in English New Testaments, simply involves, at its core, the proper attribution of worth-ship as expressed in the demonstration of homage, deference, reverence, or proper respect. It is not a concept that is restricted in its expression to deity. The etymological root and semantic range of the English word “worship” parallels this Greek term. Consequently, just as Dworkin explores expansive and inclusive definitions of “religion,” “faith,” and even “God,” so he could have done for “worship”.

At the end of the day, what is the benefit of all this bridge building? Some people will no doubt find it unsettling, pointless, or even obfuscatory as Dworkin blurs lines that have long served to order a comfortable black and white landscape. But for those who are ready to accept the greys, and even the occasional dash of fuschsia, teal, and ochre, this hammering on the Berlin walls of our respective ideologies promises to make the world a lot more interesting.