One of my readers, Mark, forwarded this short video “What is life? Is death real?” and asked for my comment. It’s well worth your time to invest the five minutes to watch it:

This is a slickly produced video with a lot of good information. But it is not simply a neutral recounting of the facts. You can say human beings are made of carbon or you can say they are made of star dust. Both descriptions are accurate but neither is neutral. Each is likely to invoke additional implied meaning in the listener, and depending on what additional meaning (aka implicature) the speaker wants to convey, he will choose one or the other.

Mark commented in his email that the video seems to convey a “hard materialism”. Hard materialism is a philosophical interpretation of scientific data, and Mark is right to find more than a whiff of it here. However, it seems to me that there is an even deeper commitment here to monistic reductionism, that is, the belief that all the diverse aspects of reality from quarks to consciousness, can be reduced to a single explanatory account subject to the same laws. Ancient Greek philosopher Democritus defended atomism, the claim that everything in  reality reduces to atoms in a void. Democritus’s view was materialistic, but it was also committed to monistic reductionism. The narrator in this video is clearly partial to materialism, but his deeper commitment appears to be to monistic reductionism. (I’ll return to unpack that point later.)

As a result, the narrator strongly rejects any claim that there may be ontologically distinct spheres in the created world such as matter and spirit. At 4:08 he states his philosophical position quite baldly:

“One thing is for sure. The idea that life is fundamentally different from non-living things because they contain some non-physical element or are governed by different principles than inanimate objects turns out to be wrong.”

In this excerpt the narrator endorses both materialism coupled with monistic reductionism. Moreover, he launches a tendentious rhetorical broadside at those who reject this materialistic reductionism by labelling it “magic” as you can see in this accompanying screenshot: 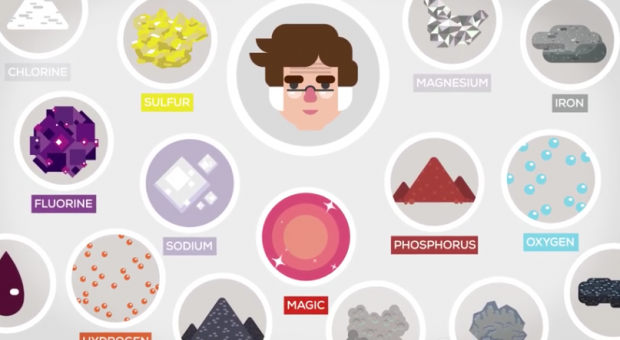 Sadly, it is very common these days to find materialists and reductionists attempting to win the debate by way of this tendentious use of labels in which all those who disagree with them espouse “magic”.

The truth is that this is nothing more than philosophical dogmatism. The narrator thinks the notion that persons are not reducible to fluorine, sodium phosphorus, oxygen (etc.) is “magic”. But from the perspective of the non-reductionist, the situation is quite the opposite: it is the very attempt to reduce persons to chemical composition (or matter in motion or whatever) that constitutes “magic”. Since the term conveys nothing of substance beyond “That view looks ridiculous to me so I’ll label it accordingly!” it’s probably best for all parties to refrain from rhetorical slights like the “magic” label.

With that in mind, let’s return to the narrator’s statement at 4:08 adding the appropriate qualification to make it more accurate:

“One thing is for sure. The idea that life is fundamentally different from non-living things because they contain some non-physical element or are governed by different principles than inanimate objects is incompatible with my reductionist philosophy and so I’m going to declare without argument that it turns out to be wrong.”

This reminds me of the work of Donald Mackay. Mackay was a professor of neuroscience at the University of Keele throughout the 1960s and 1970s. He was also a Christian and he wrote several books critiquing what he called the “nothing buttery” of his materialist and reductionist colleagues, folks who relished telling the story of carbon rather than stardust while editorializing with a “nothing but” as if theirs were simply the story of science itself. But make no mistake, “nothing but” is a philosophical judgment as surely as “something more”.

The narrator’s rhetorical coup de grace comes at the end of the video when he makes following declaration:

“Don’t look at us. We don’t have any answers for you. Just questions to think about.”

This quip reminds me of theologian Gordon Lewis’s book Decide for Yourself: A Theological Workbook which purports to be a neutral introduction to Christian doctrine that allows each reader to “decide for themselves” what they will believe. The only problem is that each chapter decides what doctrine will be discussed, the range of biblical texts relevant to the formulation of that doctrine, and the set of questions you are supposed to ask of those biblical texts. The result is that a supposedly neutral introduction to doctrine is in fact illusory: you are being directed how to think throughout the process. Similarly, this video purports to be only a neutral inquiry that asks questions: but throughout the narrator decides for you the range of legitimate and illegitimate (i.e. magical) answers. In short, this video is little more than materialist and monist reductionist propaganda.

Before we wrap up, let’s return to my claim that the deeper commitment is to monistic reductionism rather than materialism. Why do I say that? The key comes at 4:53:

As the narrator poses this extraordinary question, a little sign pops up on the bottom of the screen which states: “Leaving Science. Entering philosophy”. Oh, so now we’re entering philosophy? That made me laugh out loud since the entire video is couched in deeply philosophical categories from start to finish. As with the rhetoric about magic and only asking questions, this is yet another strategy of propaganda, one which tacitly underscores for the viewer the tendentious claim that everything which came before 4:53 is nothing but neutral scientific description.

This final question is also revealing for illustrating the deeper commitment to monistic reductionism. Everything in the narrator’s view must ultimately reduce to one type of explanation and one set of laws. There cannot ultimately be fundamentally different types of things or different sets of laws. So long as you are a reductionist you are okay in the narrator’s view.

This even includes, apparently, the view that “everything in the universe is alive”. What’s that supposed to mean? Apparently the narrator is giving a nod here to a philosophical position like panpsychism or, as Galen Strawson prefers to call it, panexperientialism, according to which fundamental units of matter — perhaps quarks or electrons — are themselves subjects of experience which, when they create aggregates like human beings or whales or dogs, create other subjects of experience. In other words, it could be that everything is mind, or a subject of experience, or alive. Apparently that’s okay, but a view like substance dualism is “magic”.

Perhaps the best comeback to this video is found in an old book written by theologian Emil Brunner way back in 1936. So I’ll let Brunner have the last word:

“One can, for example, say that man is a chemical mixture of lime, phosphorus, and nitrogen. The Bible says it more simply—man is dust. That is true, but there are other judgments. One can say, man is a machine, or rather factory with an enormous number of complicated machines, the stomach for example, a combustion machine. This is not untrue either, but it is not everything that can be said. One can say that man is an animal, and who would contest the many similarities which we have in common! […]

“Yet men have always somehow known that man is more than animal, and it is indeed a peculiar kind of scientific method which can no longer see the differences that separate man and beast and machine.” (Our Faith, trans. John Rilling (London: SCM Press, 1936), 37.)