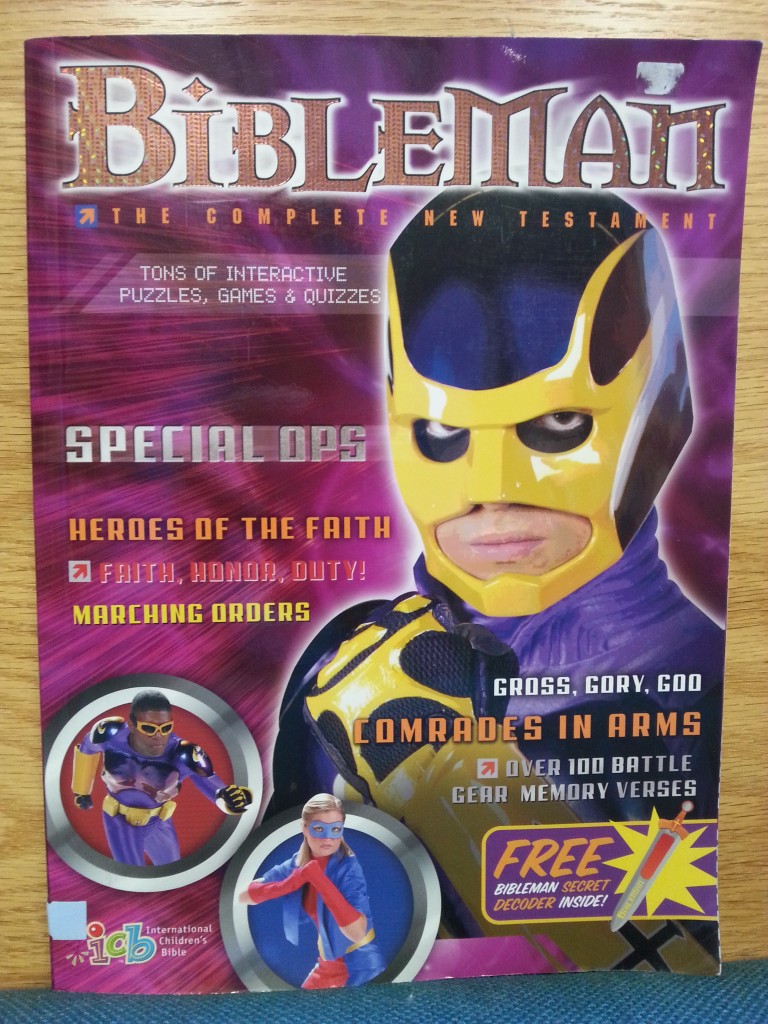 Most of these Bibles strike me as bald attempts to pander to a particular market segment (or imagined market segment). Some are okay, most are of dubious value. But none, I would submit, are as mind-numbingly bad as the Bibleman edition. Yeah, you read that right. Bibleman was a little known 1990s superhero who, sadly enough, was regularly beaten up by the Power Rangers. Even worse, one of the Teletubbies — Tinky-Winky — knocked Bibleman out cold at a children’s festival. Accounts of the incident vary, but most people agree that Bibleman accused Tinky-Winky of being a homosexual. Two seconds later Bibleman was laid out: he didn’t even see what hit him! (Incidentally, Tinky-Winky never denied being gay, a fact that Bibleman would eagerly recount to anybody who inquired about the incident.)

This Bibleman Bible pictured here is a pristine copy that I have in my collection of bad Bibles. This Bible has been out of print for years, and I think I know the reason why. It isn’t merely that Bibleman got beat up by the Power Rangers and Tinky-Winky. It’s also that the Bible contains the entire text of the New Testament, but with a marketing theme aimed at 2-3 year old boys. And I don’t know many three year olds who are up for putting on their purple Bibleman cape and then mulling over the mystery of grace and election in Romans or the dizzying visions of Revelation.

In short, the Bibleman Bible was a marketer’s answer to a question nobody asked. Come to think of it, that’s what Bibleman himself was as well.

And that’s enough to get my vote for worst Bible ever.