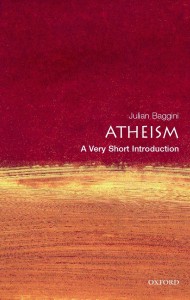 In my last article I made some positive comments about Julian Baggini’s book Atheism: A Very Short Introduction. The book is pithy, clear, and presents a very useful explication of how atheism relates to naturalism. Unfortunately, it is also brutal when it comes to engaging theistic philosophy of religion. This becomes readily apparent in chapter 6, “Against Religion”? In this chapter Baggini aims to argue that atheists like himself really are pro-naturalism rather than anti-religious. The irony is that his treatment of theistic philosophy of religion is so crass and condescendingly dismissive that it is difficult to escape the impression that Baggini is, in some sense, motivated by an anti-religiosity.

Baggini begins by claiming that the arguments for God’s existence (the arguments, as he says, of Christian apologetics) “do not prove that God exists. At best they can show that belief in God’s existence is consistent with reason and evidence.” (94) Baggini leaves the impression that the latter course of demonstrating rationality is unimpressive: “It is about reconciling belief and reason, not showing belief to be justified through reason” (93). In other words, Baggini tacitly seems to expect that for arguments for God’s existence to be good arguments they must operate at the level of a valid deductive proof with compelling premises.

As Alvin Plantinga pointed out in the 1990 edition of God and Other Minds, this is a common demand among atheists, and it is also a demand inconsistently applied since few if any arguments in philosophy attain the vaunted status of a proof. Indeed, the very idea of naturalism that Baggini defends in the book has no proofs. Thus, if theism is the worse for wear for its lack of proofs, then naturalism is as well.

“The argument is to my mind utterly awful, a disgrace to the good name of philosophy and the only reason for discussing it is to expose sloppy thinking. One fatal flaw among many is that the argument is based on principles it then flouts.” (94)

Baggini then goes on to invoke the old canard that if we say God doesn’t need a cause then we violate the first premise of the argument which says everything needs a cause. And if God can be an exception then why can’t the universe as well?

I have never encountered any theistic philosopher who invoked the argument Baggini describes here, one which begins with the premise that “everything must have a cause”. If Baggini had even the most passing familiarity with the family of cosmological arguments, he would know that none of them invoke such a blushingly self-defeating premise.

This leaves me with something of a dilemma for charitable interpretation: is Baggini intentionally caricaturing the family of cosmological arguments or is he really this inexplicably ignorant on the topic? Either way, the reality is that it is not cosmological arguments which are “utterly awful” and “a disgrace to the good name of philosophy”. That ignominious title applies, rather, to Bagginis’s strawman caricature of them.

Sadly, this is not an isolated incident. I have encountered several professional atheist philosophers who caricatured the argument (or family of arguments) in the same way. And in each case I’m left with the same puzzle: are they intentionally misrepresenting the argument or are they really this ignorant of its actual content?

Next, Baggini turns to the teleological argument. And again, he is scathing in his assessment: “This is another terrible argument that compares the universe to a mechanism such as a watch.” (96) Baggini’s one page treatment of this argument consists of a quick summary of Paley’s analogy followed by a quick rebuttal on Darwinian and Humean grounds. Baggini points out some disanalogies between a watch and the universe. This is a bit curious since Paley’s famous analogy compares the watch to an eye, not the cosmos. Regardless, at this point Baggini makes a vague hand gesture to the lack of design in the universe: “if you look at what we do know about how universes form and organisms grow, the hand of any designer is conspicuous only by its absence.” (96) Really? Tell me more!

Baggini then concludes triumphantly that “once again the argument fails spectacularly to establish God’s existence, but it does provide room for God.” (96) This is a very puzzling statement. After all, as an argument from analogy, Paley’s teleological argument never aspires to offer a proof. Imagine if a defense attorney claimed the prosecution had failed spectacularly to show the defendant was guilty because the prosecution had failed to provide a logical proof for his guilt. The defense attorney would be laughed out of the courtroom since that is not the standard of proof required for a successful prosecution. Neither is a sound deductive proof the standard for evaluating inductive arguments by analogy.

I don’t want to accuse Baggini of duplicity here, but to be frank, he seems to be engaged in some kind of shell game whilst hoping his marks don’t notice that he’s applying the standard of a deductive proof to an inductive argument.

Baggini’s summary here isn’t baldly false as in the summary of the cosmological argument. But it is critically incomplete, for that isn’t all that we have when it comes to contemporary modal forms of the argument. In those forms, it isn’t existence per se but rather necessary existence which applies to God. And the conclusion is that if God — as defined — exists in one possible world then he exists in all of them.

Next, Baggini turns to the fact that most religious people believe not based on arguments but rather on “an inner conviction”. (98) This brings us into the territory of proper basicality or immediate justification. Baggini’s treatment of this topic is also problematic. For example, he states that “If this is indeed the ground of religious belief, then it is disingenuous for believers to put forward arguments to support their beliefs.” (98-99) But this is absurd. Virtually all people believe there is a world external to the mind, other minds, and moral facts based on a parallel “inner conviction” (i.e. as a form of immediate justification) rather than by way of argument and evidence. It hardly follows that these people are disingenuous if they then provide arguments for these convictions to the skeptic.

To sum up, I share Julian Baggini’s concern that atheists be treated with respect and that atheism and naturalism be recognized as intellectually serious positions which cannot be dismissed with summary strawman caricatures. I only wish he were willing to extend the same courtesy back to the theists.