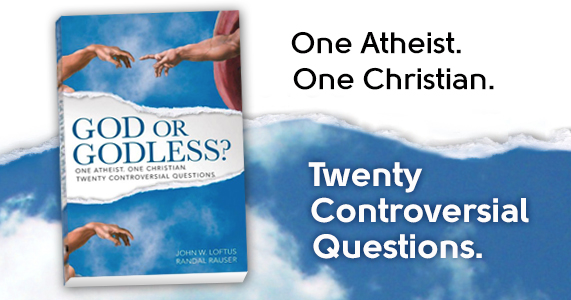 As I note in the introduction, our aim in this book was to offer twenty pithy (i.e. brief and forceful) debate exchanges on a range of diverse topics. In short, the intent of the book was to serve as a primer to apologetics debates while offering a broader range of topics than the standard arguments for/against God’s existence.

Here’s how I described the structure in the introduction:

“Forget hours of ponderous argument, tortured rebuttal, and meticulous cross-examination: in each of our debates we were restricted to opening statements of about 800 words, rebuttals of about 150 words, and closing statements of a meager 50 words. As a result we managed to touch on all the main issues on the topic in question in a breezy debate that can be read in about twenty minutes. “

I thought this would be an effective way to introduce a range of topics of debate relating to the question of the existence of God and the truth of Christianity.

Unfortunately, several readers complained that the exchanges were too brief and as such they didn’t get into sufficient depth on the topics in question. To this I ask: how much depth should one expect in a 2000 word debate that can be read in twenty minutes? That complaint resulted in a few cranium bruises borne of frustration.

Despite this criticism, I think we did a fine job of covering multiple topics in a brief exchange. And I say “we” intentionally: yes, I think Loftus did a good job in this book as well. As I have noted in the past, while I don’t think Loftus is very skilled at developing extended arguments (readers can read my review of Loftus’ big book Why I Became an Atheist to see my detailed assessment), he is nonetheless quite good at short, pithy statements which is what this book required.

Unfortunately, after the book was published, Loftus repeatedly derided my contribution. Not only is that a regrettable breach of professional etiquette, but it also didn’t do the book’s sales any favors.

Regardless, I stand behind the book and think its structure serves it well. The structure ensures there is not a word wasted as arguments, rebuttals and concluding statements are all presented with a maximum of concision and a minimum of verbosity.