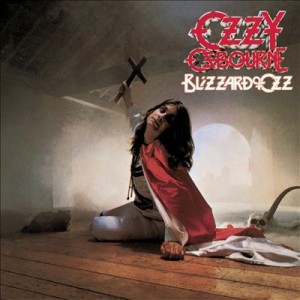 When I was growing up in the evangelical church thirty plus years ago, there were a handful of cultural icons that encapsulated fear of the world and the devil. They included such ominous figures as murderer Charles Manson, atheist activist Madalyn Murray O’Hair, and heavy metal rocker Ozzy Osbourne.

Of course, Manson was in prison and O’Hair was an acerbic elderly woman, so that mollified the threat somewhat. But Ozzy was a young-ish rocker, former singer of “Black Sabbath” with an audience of millions who apparently bit the heads off bats in his spare time. If I were to choose one pop cultural icon from the period as representing the very antithesis of Christianity, I suspect it’d be Ozzy.

Perhaps the biggest song of Ozzy’s career is found on his 1980 album Blizzard of Ozz (an album whose cover calls to mind the defeated priest in The Exorcist). That song, “Crazy Train,” remains a staple of classic rock stations and football games (all the way up to the Super Bowl). Just hearing it brings me back to the days of Pac-Man, screaming chicken Trans Ams, and head bangers.

Given that early-80s Ozzy was the pop cultural embodiment of everything evil, you might expect that his biggest song would develop those blasphemous themes by singing of the devil, evil and wickedness. And the beginning certainly sounds ominous starting with Ozzy’s call, “All Aboard! Ha ha ha ha hah!” followed by a thumping bass line and a smoking guitar riff:

By this point, any decent evangelical parent would surely have changed the radio station, for one can only imagine what lyrical impurities would soon be spilling out of the speakers.

However, “Crazy Train” is not what it might seem. If you take the time to listen to the lyrics, you find a very different picture. Let’s give the first verse a listen (the lyrics are included immediately following the clip):

Crazy, but that’s how it goes

Millions of people living as foes

Maybe it’s not too late

To learn how to love and forget how to hate

I’m going off the rails on a crazy train…

So let’s see, the pop cultural embodiment of all that is anti-Christian is singing a song about the need to learn to love others and to put hatred and misunderstanding behind us. If I didn’t know better, I would have said that sounds a fair bit like … Jesus. And as for the “crazy train”, from this perspective this picture emerges as a powerful metaphor for a society hurtling toward destruction precisely because people break into fractured “in group” vs. “out group” binary oppositions which all but ensure that we will fail to understand each other.

As it unfolds, the song’s prophetic critique is bold and sweeping, extending to the media’s manufacture of consent and the developing East/West Cold War. In short, “Crazy Train” offers a moralistic critique of western society, the media, and the penchant to categorize the world into simplistic oppositions that threaten to lose the prophetic insights to be found in the outsider … including those outsiders who come to us as anti-Christian pop cultural icons.