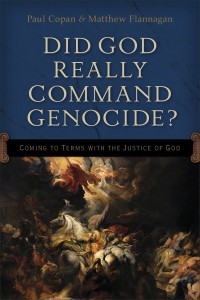 Paul Copan and Matthew Flannagan. Did God Really Command Genocide? Coming to Terms with the Justice of God. Baker, 2014, 351 pp.

Welcome to the third (and final) installment in my review of Paul Copan and Matthew Flannagan’s book Did God Really Command Genocide? For part 2 click here.

The second installment of this review ended on a cliff-hanger of sorts as I concluded that Copan and Flannagan’s argument begs a rather large question. Throughout the book Copan and Flannagan seek to explain why the divine commands for holy war recorded in the Deuteronomic history are not genocidal and, more broadly, how they could be morally defensible. The problem is that they never address the glaring question: why think God ever uttered these commands as they are recorded?

Why think this happened…?

In order to appreciate the knotty nature of this historical question, consider how evangelical apologists typically press the importance of history, particularly as it regards the resurrection of Jesus. Evangelical apologists are keen to argue that New Testament documents (e.g. the creedal formula in 1 Corinthians 15:3-5) bring us to within years of the purported events themselves. (As an introduction to this literature one might begin with Paul Copan’s treatment of the resurrection in Loving Wisdom: Christian Philosophy of Religion (Chalice Press, 2007), 116 ff.)

The contrast with the Deuteronomic history could hardly be greater for here the gap between event and report shifts from years (as in 1 Corinthians 15:3-5) or decades (as in the Synoptic gospels) to centuries. Philip Jenkins explains:

“Even by the most optimistic estimates, J [According to the Documentary Hypothesis “J” is the Yahwist source, one of four sources that comprise the Torah] would not have been written down until 900 or 850. Deuteronomy itself did not take its final form until five hundred years after the massacre of King Sihon and his subjects. That book’s authors were as far removed from the conquest as we today are from the time of Martin Luther or Christopher Columbus. Any approach to Deuteronomy or Joshua has to read it in the context of around 700 BCE, or even later, not of 1200.” (Laying Down the Sword: Why We Can’t Ignore the Bible’s Violent Verses (HarperOne, 20011), 53-54, emphasis added.)

To put it mildly, this is puzzling, all the more so when you consider that the material that Copan and Flannagan accept as historical presents us with such intractable moral problems. Given that the texts in question present us with instances of divinely commanded ethnic cleansing and genocide, why remain committed to reading them as fundamentally historical?

Copan and Flannagan’s commitment to a historical reading is even more puzzling when you consider just how many concessions they make along the way. Consider this excerpt where they acknowledge the presence of ancient near eastern literary motifs:

“Younger also notes that such accounts are ‘figurative’ and utilize what he calls a ‘transmission code’: a common, frequently stylized, stereotyped, and frequently hyperbolic way of recording history. The literary motif of divine intervention is an example. Both The 10 Year Annals of Mursil (also known as “Mursili”) and Sargon’s Letter to the God record a divine intervention where the god sends hailstones on the enemy. Tuthmosis III has a similar story regarding a meteor–or what appears to have been a meteor shower. Younger observes that these accounts are very similar to parallel accounts in Joshua 10 where God rains hailstones on Israel’s enemies. Similarly, Younger points out that in many ancient Near Eastern texts, ‘one can discern a literary technique in which a deity is implored to maintain daylight long enough for there to be a victory,’ which has obvious parallels to Joshua 10:13-14. The numbers of armies and enemy casualties are rhetorically exaggerated.” (97)

According to this passage, ancient standards for relaying history were highly stylized and included many literary motifs which are not germane to history writing today. Once we understand them in those terms, Copan and Flannagan assume that we ought not interpret them as relaying literal past events. For example, Copan and Flannagan concede that the descriptions of Yahweh hurtling hailstones down on Israel’s enemies and extending the battle day so that they can achieve victory both parallel other ANE accounts in which other deities hurtle objects from the sky and extend the day to achieve battle victory. The clear conclusion they draw is that it would be mistaken to conclude that these passages in fact describe literal events that occurred in the past. That does indeed appear to be a reasonable conclusion.

But then why not apply the same reasoning to the other instances in which deities command their people to slaughter entire populations in battle? Consider the Mesha Stele (Moabite Stone) which relays an account of the god Chemosh commanding the Moabites to go into battle against the Israelites. If the parallels of extended days and divinely hurled celestial objects are to be read as literary motifs of a battle, why not the same of the parallel accounts of both Chemosh and Yahweh commanding their followers to engage in religious herem warfare?

Consider as well that Copan and Flannagan also concede that one can detect ideological assumptions driving the composition and formation of the text. For example, they observe that Joshua 9-12 reveals “the same imperialistic ideology as other ancient Near Eastern conquest accounts.” (98) This raises yet another problem. After all, generally when we detect that an imperialistic ideology has shaped the telling of a narrative, that fact provides grounds to question the narrative. To be sure, this doesn’t entail that the narrative is necessarily untrustworthy or deceptive. But it does raise a caveat, all the more so when the narrative invokes the will of a national or tribal deity to justify radical actions like genocide and ethnic cleansing. So why not adopt a critical approach to the narrative and its recounting of Israel’s national history?

This leaves me perplexed: given that Copan and Flannagan recognize the presence of hyperbole, literary motifs, and imperialistic ideology in the text, why don’t they extend their modified reading to the very passages that describe Yahweh commanding herem warfare in the first place?

What kind of (inspired) literature is this?

It is at this point that Nicholas Wolterstorff’s appropriation theory of biblical inspiration becomes helpful. If we detect in the Deuteronomic history evidence of hyperbole, literary motifs, and imperialistic ideology, then (according to Wolterstorff’s theory) this is because these are the kinds of texts that God sovereignly appropriated into his canon of scripture. It would seem that many evangelicals assume without argument that God wouldn’t appropriate this kind of literature. However, we need to be very careful about assuming a priori what kind of literature God would have appropriated, and to what end he might have appropriated it.

With this in mind, it is an open question as to whether, for example, God might have sovereignly appropriated into the Deuteronomic history texts that include errant descriptions of the divine nature and will. The really interesting thing is that Copan and Flannagan already concede there are errant depictions of God of just this kind. After all, they affirm the imprecatory psalms as part of scripture even as they repudiate the moral perspective of the imprecatory psalmist. To begin with, they quote William Lane Craig who critiques a dictation view of scriptural inspiration based on the presence of ignoble moral aptitudes in the scriptural writers:

“There are also elements in Scripture that express the emotions and anxieties and the depression of the human authors, and it seems implausible to attribute those to God’s dictation. These seem rather to be genuine human emotions that are being expressed.” (Cited in 21)

Copan and Flannagan then go on to note that Craig applies the point to the imprecatory psalms:

“An example he [Craig] gives are the so-called imprecatory (or prayer-curse) psalms. Psalm 137 is a psalm written while in exile in Babylon: ‘By the rivers of Babylon we sat and wept when we remembered Zion. There on the poplars we hung our harps, for there our captors asked us for songs” (vv. 1-2). The psalm ends with a startling statement: “Daughter Babylon, doomed to destruction, happy is the one who repays you according to what you have done to us. Happy is the one who seizes your infants and dashes them against the rocks” (vv. 8-9). Craig argues that this runs contrary to what Jesus said about loving our enemies, concluding that it is hard to think of this as something that is dictated by God rather than a genuine expression of the Psalmist’s anger and indignation of those who opposed God.” (22)

As Craig, Copan and Flannagan all note, the imprecatory psalmist makes false statements about God. For example, in Psalm 37:13 the psalmist declares that God delights in the destruction of the wicked. This contradicts the claim of Ezekiel 18:23 — to say nothing of the life and teaching of Jesus himself — that God takes no such pleasure.

Given that Copan and Flannagan are willing to recognize that God sovereignly appropriated passages into the imprecatory psalms which make false theological claims about God, why not consider that the Deuteronomic history itself makes false statements about God? Of course, one might well ask why God would include such literature in his canon. However, I can think of great reasons to include the imprecatory psalms — for example, they are a record of real human experience and emotion with which we can identify and from which we need to be transformed. I see no reason that aspects of the Deuteronomic history cannot serve a similar function. Indeed, if there is one thing clear in the history of Israel, it is that Israel is often a stumbling exemplar that provides a mirror to the human condition generally. In that respect, the open question is just how far Israel stumbled, and what we can learn from it.

There is much more I’d like to say about Did God Command Genocide? and in the future I will be returning to critique additional aspects of the book. But as I draw things to a close, let me note that it is an unparalleled defense of divinely commanded ethnic cleansing and genocide. And if that sounds like damning with faint praise, I suppose it is. As much as I admire Copan and Flannagan as scholars, I cannot help but be disappointed in their decision to commit their formidable acumen to defending such a bloody and unnecessary thesis.

Thanks to Baker for a review copy of the book.