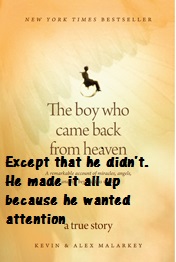 Did you hear the one about the boy who went to heaven? Except that he didn’t. Because he made it all up. Because he wanted attention.

(But give him credit. He felt guilty, admitted it, and wanted to set the record straight.)

And then there is the Christian publisher who published the book and promised to take it off the market.

But they haven’t explained why they published this stuff in the first place.

(Isn’t that easy? They published it because people would buy it. And it’s all about $.)

And they haven’t promised yet to refund purchasers who were duped by the made-up story of a boy visiting heaven.

Unlike the admirable publisher of James Frey’s partially fabricated memoir Million Little Pieces which offered a full refund to those who wasted money on that book.

Even though it was only partially fabricated.

Unlike The boy who came back from heaven which was completely fabricated all the way from here to eternity.

And yet, that publisher isn’t giving any refund for all the credulous Christians who bought that fanciful book.

And did you hear how this new story is really an old story?

After all, twenty five years ago a Christian publisher printed Lauren Stratford’s shocking story to the world.

It was a salacious story of Satanic abuse which fit perfectly into the Satanic scares of the late 1980s.

Just like The boy who came back from heaven fit perfectly into the late 2000s heaven obsession.

And the truth was only revealed after a courageous Christian magazine did an expose.

And the publisher had already made their money off a credulous public.

A public that was all-too-ready to buy unsubstantiated stories of Satanic abuse,

just like they’re all-too-ready to buy unsubstantiated stories of visits to heaven.

And nothing ever changes.

Thanks to my friend Zaak for notifying me of this developing story.