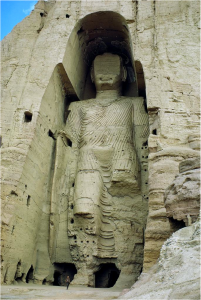 In March 2001 the world watched in horrified disbelief as the Taliban destroyed two towering Buddhist statues which had stood for centuries in the Bamiyan Valley. The Secretary General of the UN, Kofi Annan, responded by declaring that “True faith elicits respect and you have to respect what is sacred to others.”

The Taliban and Ancient Israel

Consider, for example, this directive that Yahweh provides to the Israelites:

Exodus 34:11-14: 11 Obey what I command you today. I will drive out before you the Amorites, Canaanites, Hittites, Perizzites, Hivites and Jebusites. 12 Be careful not to make a treaty with those who live in the land where you are going, or they will be a snare among you. 13 Break down their altars, smash their sacred stones and cut down their Asherah poles. 14 Do not worship any other god, for the Lord, whose name is Jealous, is a jealous God.

Note that the Israelites are ordered to destroy the religious-cultural symbols of the Canaanites: altars, sacred stones, and Asherah poles (wooden totems of the goddess Asherah).

In Deuteronomy 7:5-6 God reiterates the order, except instead of merely cutting down the Asherah poles the Israelites are to burn them to ash:

5 This is what you are to do to them: Break down their altars, smash their sacred stones, cut down their Asherah poles and burn their idols in the fire. 6 For you are a people holy to the Lord your God. The Lord your God has chosen you out of all the peoples on the face of the earth to be his people, his treasured possession.

One of Israel’s greatest kings, the righteous and reforming Josiah, distinguished himself by his zealous destruction of competing religious symbols:

The toleration of Canaanite religion is treated in the text as a type of cancer: failure to remove it will lead to it spreading through the land (e.g. 2 Kings 13:6, 17:10). Thus, kings like Josiah were driven by their zeal for religious purity and an attempt to extirpate idolatry and blasphemy from the land.

In our own age, the Taliban has shown an equivalent zeal for religious purity and a desire to extirpate idolatry and blasphemy from the land.

And just a few days ago, Muslim radicals did the same when they massacred people in the offices of Charlie Hebdo.

So is it ancient Israel and radical Islam on one side and the modern “enlightened” world on the other?

Modern Germany and France and the United States

Alas, it isn’t that simple. In Germany today it is illegal to display a swastika publicly (except for scholarly purposes or as part of the established iconography of an eastern religion). In other words, modern Germany has cut down, burned and ground into power the Nazis’s “Asherah poles”. An unmistakeable and uncompromising response of intolerance, and yet one that most people will find justified.

A sidebar: Does Nazism really qualify as religious in nature? The short answer is: yes. But regardless, the real question is not simply about tolerance of “religious” opinion (whatever that is exactly). Instead, it is the tolerance of religious and/or ideological opinion. Let’s keep the category sufficiently broad so that we do not exclude any morally serious expressions of tolerance/intolerance. The ideologically driven violent suppression of a socio-political movement is not substantially different from the ideologically driven violent suppression of a religious movement.

As for France itself (the home of Charlie Hebdo), the government passed legislation in 2010 against the public display of facial coverings including the Muslim burqa and hijab. The legislation may not have explicitly been targeting conservative Islam, but a significant motivation for the legislation came in the public suppression of expressions of conservative Islam in contemporary French society. If I grant that legislative suppression is not the same thing as violent destruction, I hope you will grant that the two nonetheless exist on the same continuum. 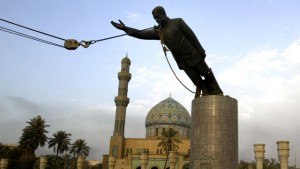 And don’t forget the toppling of the Saddam Hussein statue in Firdos Square in 2003.

So the issue isn’t simply ancient Israel and radical Islam against the modern “Enlightened” West. People commonly believe there are instances where the active suppression of particular religious and/or ideological opinion and cultural expression is justified.

As a result, matters are more complicated than Kofi Annan recognized. Saddam statues and Nazi symbols do not elicit much respect from people in the West, no matter how “sacred” they may be to others.

It is left to each of us to ask when we believe intolerance and active suppression — perhaps even suppression that finds recourse to violence and destruction — is warranted.