John Loftus just published a post titled “Gallop [sic] Poll: 21% Say the Bible is An Ancient Book of Fables.” He then comments “Conservative fundamentalists are losing this war” and in support of this claim he posted these poll results: 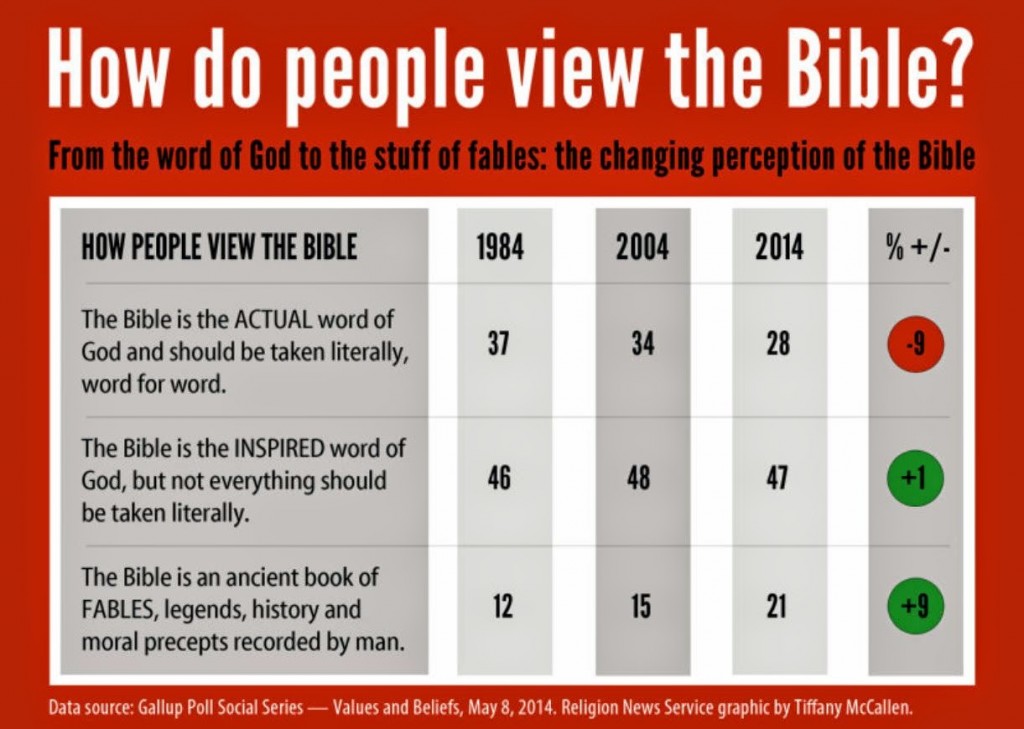 Loftus interprets this shift as evidence that “conservative fundamentalists” are losing the “war”. Note first that by describing the shift in those terms, Loftus assumes the fundamentalist framework of a culture war. And note as well that Loftus then concludes that “his side” is winning this culture war.

I analyze the data rather differently. Let’s begin with the first position. This position represents the common Christian fundamentalist view that one ought to interpret texts literally when possible. This is an absurd hermeneutic, but it is true that it is widely assumed among Christian fundamentalists. On this view, the nuances of genre and socio-historical context are set aside (to say nothing of the complexities of textual criticism) as texts are interpreted in a flat, literalistic manner under the mistaken assumption that this is somehow a neutral and safe approach to texts. This view is also driven by an assumption that texts find their authority by accurately relaying facts, including facts of history and science.

Now consider the second position, beginning with the first two descriptors for the biblical texts: “fables” (or FABLES) and “legends”. This priority of ordering suggests that as surely as the Christian fundamentalist is concerned with literal reading and the accurate relaying of historical and scientific facts, so this second group will tend to adopt a skeptical approach to the text precisely because of a rejection of the literal meaning and a conviction that the Bible has failed to convey accurately those historical and scientific facts.

As you can imagine, the locus classicus in this regard is the young earth creationist interpretation of Genesis 1-2. The Christian fundamentalists assume these two creation narratives are to be read in a flat literalistic manner and that their authority is carried by the accurate conveyance of historical and scientific facts. The second group shares this assumption but has simply concluded that the texts do not accurately convey those historical and scientific facts. And so they reject the texts.

Perhaps it is not a coincidence that even as the religious fundamentalists have dropped 9% in the last thirty years so the other position has grown by 9%. In other words, while fundamentalists may shift their identity from “Christian” to “atheist” or “skeptic”, many of them never question their own errant assumptions about textual meaning and authority. Nor do they question their simplistic, absolutist picture of the world borne out in the stark categories of a culture war.

In other words, fundamentalists are not losing the battle. Rather, they are merely shifting allegiances in their own misbegotten culture war.