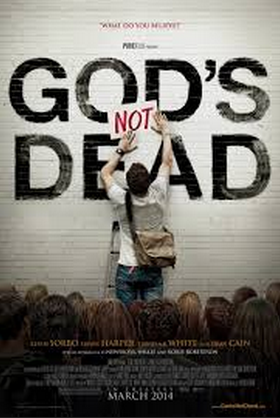 I finally saw “God’s not Dead.”

I was prepared to be amused and perhaps irritated.

I didn’t expect to be outraged.

However, by the end I found myself drawn to one descriptor: reprehensible. Strong word, I know. Let me explain why.

Christians have often complained about the way they are depicted in Hollywood. And they definitely have a legitimate ground for complaint. From the crazy Christian fundamentalist mother in the 1976 classic “Carrie” to the psychopath Max Cady in 1991’s “Cape Fear” to the crusading moralist Patricia Whitmore in 2012’s “Rock of Ages”, portrayals of the Christian as oppressive, psychopathic, and/or moralistic and uptight  are so common as to be tired clichés. On the whole, Hollywood has not been kind to Christians (though it’s been even worse to Arabs: see the film “Reel Bad Arabs“).

Given that (conservative) Christians have often been caricatured, mocked, even demonized in Hollywood films, you might think they’d respond by providing thoughtful and nuanced portrayals of other minority groups within a “Christian” film. Instead, God’s not Dead perpetuates the problem by stereotyping other minority groups.

To begin with, there is the Muslim girl who is forced to wear the hijab by her overbearing father. And when he discovers that she has been surreptitiously listening to Franklin Graham sermons (not Lady Gaga or Kesha!) he immediately hits her and casts her out of the house.

Yeah, I know there are Muslim fathers who would do that. There are also crazy Christian fundamentalist mothers and psychopaths and anti-fun moralistic crusaders. So? Here the filmmakers have an opportunity to offer a sympathetic portrayal of Muslim family relations, and instead they blow it with a caricature.

This is all the more unfortunate given that Christians and Muslims have many shared concerns and challenges. At one point the Muslim father tells his daughter why she needs to wear the hijab in public. I didn’t find the scene played out with a great deal of sympathy for the father. And yet, a Christian father might have the same conversation with his daughter over why she can’t go out wearing a shirt that exposes her midriff. Why not use these characters to create some degree of sympathy and understanding for minorities that are oft misunderstood and marginalized?

The next stereotype is a young woman reporter who is also a secular animal rights activist. She’s angry at the world and fiercely judgmental of those around her who kill animals and eat meat. This certainly comes through in her interview with the smiling and friendly Duck Dynasty guy (sorry, I don’t know his name and I don’t care) who makes a cameo appearance in the film. Here we have the stark juxtaposition of the well adjusted Christian hunter and meat lover over-against the angry and judgmental animal rights activist. Of course, there is no attempt to explore her views or to understand the motivating compassion for other sentient creatures and ecologically sustainable living that drives people to eschew meat eating.

One Chinese student keeps calling his father back in China telling him of the evidence for God’s existence he is hearing in the classroom. The father hisses into the phone that he must stop talking like that or he will jeopardize his younger brother’s future. To be sure, China has a poor human rights record when it comes to religion, and I have no intent of downplaying that fact. But the film does nothing more than invoke a cardboard character as a minor plot-point.

The film’s protagonist is a young Christian student (more on him in a moment). While he senses God’s call to take on the atheistic philosophy professor in the classroom (more on that also in a moment), his blonde superficial girlfriend attempts to deter him. When this blonde girlfriend appeared on campus to deter him from his mission, my daughter wisely observed (albeit with a touch of hyperbole), “Every movie has an evil girlfriend who asks for a lot.” Okay, not every movie. But common Christian tropes include the party crowd and the lukewarm Christian who will attempt to deter you from your calling (Rev. 3:15). Blonde girlfriend illustrates the latter.

The Muslim, animal rights activist / reporter, communist, and blonde superficial girlfriend stereotypes are merely bit players on the periphery of the film. The beating heart is a confrontation between an evil atheistic philosophy professor — one who embodies the worst fears of the typical Christian conservative — and a young Christian freshman.

The fact is that there are philosophy professors out there who are hostile to Christianity. For example, back in the mid 1990s I remember one philosophy professor at Simon Fraser University who had a reputation among Christian students for exhibiting hostility toward Christianity and condescension toward Christian students. (I never attended SFU, so I can’t confirm the reliability of the reports. But reputations typically are earned with some degree of evidence.)

But “God is not Dead” takes this theme and draws it in cartoonish proportions. In the film the professor insists in the very first class that all students write “God is dead”, Nietzsche’s famous declaration, on a sheet of paper. One lone student, our young freshman hero, refuses to do so. And so the professor challenges him to defend God’s existence in front of the class over the next three classes. At one point the prof encounters the student in the hallway and snarls that in the classroom “There is a god, and I’m him.”

And so the freshman is led into the proverbial arena to face the frothing lion of a professor. And over the next three sessions he lays out a case for God’s existence drawing on big bang cosmology while deflating the problem of evil with a simple appeal to free will. His presentation includes animation and graphics of a level of sophistication to impress any TED talk audience. Because of course a freshman has all the time and technological know-how to put together top-grade presentations even as he researches and writes lectures that can humiliate his professor.

At one point the freshman seeks encouragement from his pastor. He estimates that there are about 80 students in the class. When his pastor asks how many he thinks go to church he opines that he’s the only one. Really? According to the Pew Forum, 78% of Americans are Christian. But in this classroom it is just over 1%? Yeah, makes perfect sense.

The pastor then gives the student some advice in the form of a couple scriptural references about Jesus being ashamed of us if we’re ashamed of him. In other words, proof-texting and driving Christian action with guilt and fear. Yeah, I remember that growing up.

The hero needn’t have worried. He maintains his courage and carries out his mission. At the end of his lectures, his fellow students all stand, one after another, to declare him the winner over the atheist professor. Every one of those 80 students now believes God exists. (For some reason as they stood I kept expecting them to say “O captain, my captain.“) Obviously the evidence for God is just that overwhelming.

A closer look reveals that the freshman’s presentations are perfectly awful as he attempts to justify the Bible with a naïve, cherry-picking concordism. For example, the Big Bang is anticipated in Genesis 1:3. Right  And where is the creation of the firmament and the ocean above (Gen. 1:7) supposed to fit into this schema? As for free will, sure that may provide a part of a response to the problem of evil. But anybody familiar with the vast literature on this topic knows it to be at best a very partial response.

The conclusion to the film is what really angered me. Everybody in town converges on a Newsboys concert. And while there, the lead singer, Michael Tait, along with his friend — the Ducky Dynasty guy — tell the audience to text out “God’s not dead” to all their phone contacts in honor of the young freshman who humiliated the atheist philosophy professor. (Apparently word has gotten around.)

At the same time that all these texts are being sent out, the atheist professor is hit by a car. Two Christians are immediately on the scene (including the pastor mentioned above). They immediately conclude that he will shortly die and they tell him this. Note that they don’t try to encourage him by saying, “Buddy, just hold on! You’re going to make it!” No, they tell him he’s about to die. For goodness sake, what kind of first responders are these?!!!!

Of course, he does die because the plot requires the blood of the apostate. But not before he has a deathbed conversion. Just after his death his phone buzzes with a text from one of his concert-going contacts: “God’s not dead.”

Right! God’s not dead. But the one-time atheist professor now is. Get it?! Oh the irony.

The entire scenario is a clear riff off the familiar pun that heads this section. Nietzsche declared that God is dead. But now it is the professor who is dead along with Nietzsche. Even as thousands of Christians party it up at the Newboys concert.