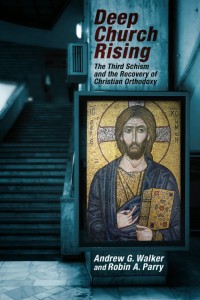 Robin Parry and Andrew Walker’s new book, Deep Church Rising, is a call to ressourcement (see, for example, 44) in response to the unique challenges of our age. As Parry and Walker (henceforth P&W) point out, “The purpose of going back is not one of antiquarian curiosity, but to retrieve something that we have lost in order to make the church vital again in the present.” (49) The book unfolds in two parts: diagnosis and remedy.

In Part One, “The Third Schism: On Losing the Gospel,” P&W spend two chapters unpacking what they call the “third schism”. As they explain, the first schism was the split of Eastern and Western churches while the second schism arose at the time of the Reformation. According to P&W, our contemporary age presents challenges to the church that are of sufficient gravity to warrant the sober moniker “the third schism”. In short, we are in an age where the very identity of the church is in question.

The situation P&W describe reminds me of J.B. Phillips’ translation of Romans 12:2: “Don’t let the world around you squeeze you into its own mould, but let God re-mould your minds from within…” As P&W see it, the modern world is squeezing Christianity into its mould even as it “undermines the very basis of Christian faith in its denial of the Trinity, incarnation, and the resurrection, and in its treating Scripture as an object of scientific inquiry rather than as a sacred text.” (x)

So how do P&W propose that we respond to this state of affairs? Their solution is mapped out in part 2 under the title of “deep church” , a term first proposed by C.S. Lewis which advocates for the above-mentioned ressourcement as a way to strengthen the church against the challenges of the contemporary world. P&W seek to challenge the church to strengthen contemporary ecclesial expressions of belief, worship and living by returning to the resources of Christian history. The second part of the book (chapters 3-9) is devoted to unpacking this project with the heart of the proposal being found in chapters 5-7 which outline the call to deep faith (chapter 5), deep worship (chapter 6) and deep living (chapter 7).

As I read Deep Church Rising, the following passage from Jesus’ Parable of the Sower (Matthew 13) lingered in the back of my mind:

“4 As he was scattering the seed, some fell along the path, and the birds came and ate it up. 5 Some fell on rocky places, where it did not have much soil. It sprang up quickly, because the soil was shallow. 6 But when the sun came up, the plants were scorched, and they withered because they had no root.”

P&W have written an engaging and balanced treatise calling for deeper soil. Their vision is both ecumenical and evangelical with a robust ecclesiology and a healthy appreciation for liturgical form (Parry is Anglican, Walker is Orthodox). In that respect, there is a depth of vision here that is often missing from the books one often finds coming from conservative North American evangelicals: all the better to counter “gospel amnesia” (14). Speaking of North American theologians, I found P&W’s call for deep church to resonate well both with Thomas Oden’s defense of “paleo-orthodoxy” and Robert Webber’s call for “ancient-future faith”. Given that Oden and Webber seem kindred spirits to the deep church movement, I was surprised to find neither referenced in the book.

Being a quibbler by nature, there are many points in Deep Church Rising with which I could take issue. For example, unlike P&W (and other theologians like William Placher) I don’t believe that medieval theologian Duns Scotus’ defense of theological univocity qua being was/is problematic (19). In fact, I think he’s quite right. (William Alston offers an excellent defense of univocity in Divine Nature and Human Language: Essays in Philosophical Theology (Cornell University Press, 1989).)

I am also less sanguine than P&W about Vincent of Lerins’ three tests for orthodoxy: i.e. “that which has been accepted by (a) everyone (universitas), (b) always (antiquitas), and (c) everywhere (consensio)” (51). Without extensive qualification, a principle like this could prevent theologians from adopting novel theological proposals like theistic evolution, quantum or chaotic models of divine action, or materialistic theories of the person.

No doubt P&W are prepared to field a few quibbles. After all, they intentionally wrote a sweeping, programmatic book, aiming for “polemic rather than a careful historical analysis” (5). In this regard, if the book can provide a catalyst for further discussion and debate, it will have served its purpose well. In my view Deep Church Rising would work very well as a supplementary intro to theology textbook. I would also like to see it widely read among clergy and in small group study. On that point, I would humbly suggest that P&W consider writing a supplementary small group study guide to accompany the text.