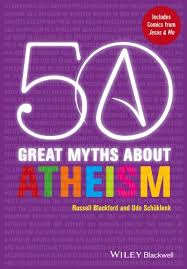 When Russell and Schüklenk use the word myth, they are referring to a widely held and persistent belief that is demonstrably false. (As they write in the introduction, they are focused on claims that “are false” and yet “have managed to persist remarkably well…” (1)) For example, they refer to the belief that Barack Obama was born outside the United States as a myth, one that was finally put to rest when Obama produced his birth certificate (2). With that definition in mind, 50 Great Myths shoulders the ambitious task of putting to rest more than four dozen false and persistent beliefs about atheism.

Buckle up, kids. We’re in for quite a ride.

This certainly is an ambitious agenda. Have Russell and Schüklenk really identified fifty distinct beliefs about atheists that are widely held and demonstrably false?

Let’s start with an example: myth 5, “Atheists Hate or are Angry with God”. Some atheists do evince a palpable hostility toward God (or, if you prefer, the concept of God), such as self-identified “anti-theist” Christopher Hitchens. But even if we grant these instances, it hardly follows that all atheists hate God or, counterfactually, that they would hate God if he existed. I know many atheists who show no such hostility. Some even insist that they really would prefer that God existed. They just happen not to believe in God’s existence. Concrete examples like that show the claim to be a myth.

So that’s one myth down.

However, I don’t think Russell and Schüklenk have identified (let alone debunked) fifty widely held and persistent false beliefs about atheists. In some cases they take a single myth and spin it into two. Consider, for example, myth 18 “Atheists Turn to God When Death is Near” and myth 19, “There are no Atheists in Foxholes”. Russell and Schüklenk interpret the latter claim in a literalistic fashion: “The myth is that atheists won’t be found in the military, or at least that their atheism will not last long once they come under enemy fire.” (56) But in fact, this aphorism merely appeals to the image of the foxhole (a hole used by soldiers to seek cover from military bombardment) as a metaphor for stressful situations (see the Wikipedia article on “There are no atheists in foxholes” .) Thus, myth 18 could have been subsumed under myth 19 without loss.

In many other cases, it is doubtful that the belief in question really meets the standard of a myth. For example, how many Christians claim that “Atheism is Only for an Educated Elite” (Myth 49)? I have no idea, but I can say that I have not often heard this claim. To be sure, one does hear Christian conservatives often complaining about the secular intelligentsia (e.g. universities, the media) but that doesn’t necessarily cash out into this myth.

This problem highlights the inherent vagueness in Russell and Schüklenk’s usage of the concept of myth. How widespread and persistent does a claim have to be to constitute a myth? It isn’t clear. To be sure, I don’t offer this as an objection to the book. Rather, I present it as a means to situate the book appropriately. The concept of “myth” provides a useful framework to disabuse the reader of some common (and not so common) misconceptions about atheism while serving as an apologetic for Russell and Schüklenk’s atheist beliefs.

With that in mind, how good is the book? To begin with, I enjoy the way Blackford and Schüklenk write. They are good communicators and have an easy and engaging prose style that finds a good balance between accessibility and rigor. I enjoyed reading most of the chapters, even where I strongly disagreed with some aspect of the analysis.

I also found some chapters to be outstanding. I especially appreciated the chapter on humor (myth 13, “Atheists Have No Sense of Humor”). That chapter ends with the authors recounting one atheist joke about Christians and one Christian joke about atheists, while encouraging everybody to remember the importance of a sense of humor (44). This kind of levity offers a welcome respite from the frequent acrimony of these debates. (Incidentally, they mention George Carlin as an atheist humorist, but there are many others from Mark Twain to Ricky Gervais.)

While we’re on the topic of humor, the book is complemented by several irreverent “Jesus & Mo” cartoons. (See the Jesus and Mo website here.) Some people will find them funny, others (i.e. some Christians and Muslims) will find at least some of the cartoons offensive (or perhaps even blasphemous). But one thing is undeniable: the cartoons are always relevant to the subject matter.

At its best, the book reflects a balance and irenicism that is to be admired. For example, in myth 26 they take aim at the common Christian belief that “Atheists Can’t be Trusted.” (I also critique this myth in my book You’re not as Crazy as I Think.) This is how they conclude the section:

“To be fair, atheists also seem to consider religious people to be less trustworthy than fellow atheists…. Perhaps both atheists and religious believers would do well to respect and trust each other a little bit more, despite our ideological differences. We are fellow humans first.” (84)

I also really enjoyed the chapters debunking the myths that Hitler was an atheist (Myth 28) and that Einstein was a theist (Myth 45). Both of these chapters are well researched and very informative. And given that these claims both do seem to qualify as myths widely circulated among Christians, they are especially helpful.

The fifty myths are grouped into eight chapters and are complemented by a final chapter on “The Rise of Modern Atheism” which offers a quick overview of several topics including the recent history of atheism, a rebuttal of classic theistic argument, and an analysis of the tension between science and religion.

The Bad and Ugly

As much as I enjoyed the book, there were aspects of it that eroded what would have otherwise been a ringing endorsement. Since I’ve titled this section the bad and ugly, let me begin with the latter. Where ugliness is concerned, I’m thinking of the bright violet book cover complemented by the multi-colored fridge magnet atheism lettering. Definitely on the gaudy side.

Of more import is the bad. At many points I disagreed with Russell and Schüklenk’s reasoning. For example, on the topic of the above-mentioned myth 5 they write: “Let us start with a pretty obvious point: atheists cannot be angry with God, and we cannot resent God … because we do not believe God actually exists. How could you hate or resent something you do not think exists?” (21) As I suggested above, there is a simple answer available: some atheists exhibit hostility toward God insofar as they not only believe God doesn’t exists but they also desire that God not exist. Surely this much is implied by Hitchens’ espousal of the term “anti-theist”.

Later in this section Russell and Schüklenk take issue with Alvin Plantinga’s claim that some recent new atheist books are “driven by hatred rather than logic.” (Cited in 22) They reply, “This kind of language is problematic, because it is only a small step away from characterizing your opponents as motivated by hatred to calling for their speech to be suppressed and for stigmatizing them as enemies of the social order.” (22) Huh? Plantinga’s simple observation that some recent new atheist writing evinces a troubling hostility and militancy is sufficient to charge him with paving the way to the social oppression of atheists as “enemies of the social order”? This analysis is borderline paranoid. It also has a bizarre consequence: by this reasoning any critique of putative incendiary language or hate speech would itself be censured as intolerant.

There is also lack of balance in their treatment of myth 31, “Atheists are Intolerant.” While I agree that Christians over-play this hand, I would have appreciated it if Russell and Schüklenk would have conceded that atheists sometimes do make proposals that are arguably intolerant and worthy of concern. Consider, for example, atheist and militant secularist Nicholas Humphrey’s 1997 Amnesty International lecture where he opines:

“children have a right not to have their minds addled by nonsense. And we as a society have a duty to protect them from it. So we should no more allow parents to teach their children to believe, for example, in the literal truth of the Bible, or that the planets rule their lives, than we should allow parents to knock their children’s teeth out or lock them in a dungeon.” (Source)

Rhetoric like this raises the obvious question: who decides what constitutes “nonsense”? Presumably Humphrey and those of like-mind? How is this not a recipe for intolerance?

50 Great Myths has a lot to commend it, and it is arguably at its strongest when the authors concede a grain of truth in the myths they aim to debunk. Unfortunately, that doesn’t happen as often as one might like. It is at those points that Blackford and Schüklenk’s ideological commitments become evident. At the same time, these weaknesses are not sufficient to undermine a work which is frequently informative and thought-provoking. 50 Great Myths is well worth placing on your bookshelf.